How to control Japanese beetles organically (and make duck eggs)

Tyrant Farms is reader-supported. When you buy through links on our site, we may earn an affiliate commission. Learn more
285 shares Here’s an effective control method for Japanese beetles — if you have ducks or chickens, this method can also help make your breakfast.

Years ago, we got a yard. As a result, we inevitably had to figure out what management approach we wanted to take with our little slice of earth.

Since we love fresh, local organic produce and truly free-range duck eggs, we’ve long-since decided that we’d just grow those things right out the front door. As such, we now have about a half acre edible organic landscape and a flock of Welsh Harlequin ducks that tell us what to do on a daily basis.

Our ducks also enjoy eating some of the produce we grow, since their mischievous bird brains believe that the edible landscape was created solely for their foraging and dining pleasure. Thankfully, they don’t like much of the fruit we grow (melons, blueberries, blackberries, strawberries, etc.).

However, they love worms, leafy greens, INSECTS, and—their absolute favorite—tomatoes. If there was a bald eagle holding a shotgun while standing atop an angry wolf, our duck flock would murder them both, if they got between them and a good, vine-ripened tomato. 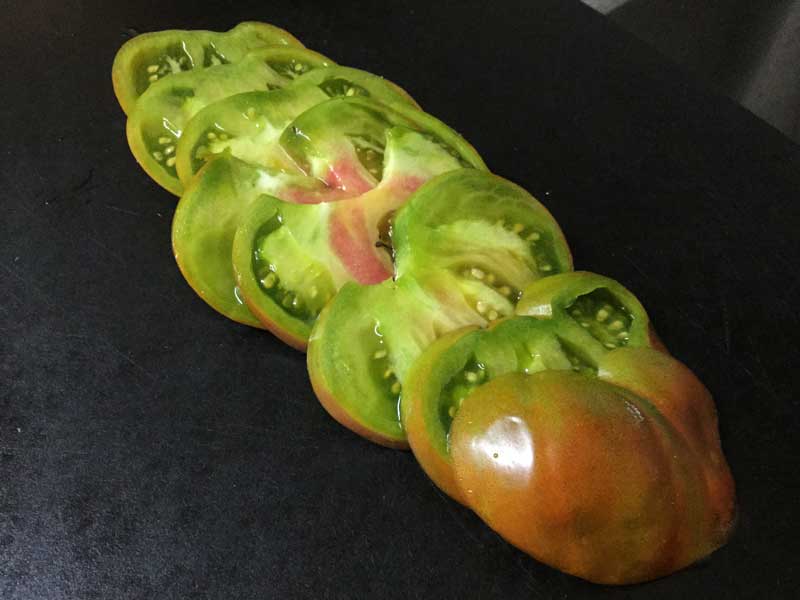 Paul Robeson heirloom tomato. Do not get between these and a duck or you will be trampled.

Over the years, what started as a hobby has turned into an obsession. As such, we’ve read hundreds of peer-reviewed research papers on agriculture and enjoyed thousands of hours of hands-on education practicing “permaculture,” a systems-based approach to food production (and life). What we’ve learned through the combination of those two activities has been completely transformative.

We don’t use any synthetic fertilizers or pesticides on our lawn, er, “farm.” Instead of using those methods, which cause all sorts of negative downstream problems, we focus on improving the health and resilience of our ecosystem.

What insects or birds do we need to attract to deal with a particular pest insect problem? What plants do we need to put together into a guild system so that they’ll all grow better together and stack functions? How can we improve our soil health and feed the beneficial microorganisms in our soil? What impact will our actions have on the team of other microscopic and macroscopic species that share our yard with us?

This approach has yielded wonderful results, and we’re continuing to learn more each year. However, there are certain “enemies” that come along that can make a person want to drop a nuclear bomb on their own front lawn in order to end all the suffering…

Japanese Beetles: The Mother Of All Evil

One such enemy pest insect is the Japanese Beetle (Popillia japonica). From June-July (in our Ag zone) Japanese Beetles can cover some of our food crops like locusts, skeletonizing leaves and defoliating plants as they go.

In our garden, Japanese beetles’ favorite foods seem to be the leaves on our cane berries, grapes, cherries, elderberries, edible roses, paw-paws, and aronias. Since Japanese Beetles are a non-native invasive species that have been here for less than a century, there aren’t very many native predators that can keep their populations in check. (As you can see from the photo below, there are indeed some native predatory insects that enjoy snacking on Japanese Beetles.)

Not all stink bugs are bad! We were happy to see this Florida Predatory Stink Bug (Euthyrhynchus floridanu) eating one of our worst pest insects, the Japanese Beetle. These predatory #stinkbugs have really neat mouthparts, first spearing their prey before slurping out the insides. Yikes! If you live in the southeast, be sure you know what their nymphs look like so you don’t accidentally kill them (they’re black with red markings). Unlike most other predatory insects, the nymphs and the adults will sometimes attack larger prey in groups. #PredatoryInsects #PredatoryStinkbug #BeneficialInsects #nature #ecosystems #Organic #Gardening #permaculture #GrowJourney A photo posted by Tyrant Farms (@tyrantfarms) on Jun 21, 2015 at 3:01pm PDT

How do you control Japanese beetles organically?

There is no single way to control Japanese beetles organically. The solution will depend on your resources, how large your growing space is (farm or garden), and other factors. For instance, you might find that a homemade garlic solution applied as a foliar spray keeps Japanese beetles off your plants by making them smell less palatable.

However, given our unique resources (especially ducks) we wanted to figure out how we could go to the next level: take a problem and turn it into a solution. As the saying goes, “if life give you lemons, make lemonade!”

With that paradigm in mind, Japanese beetles are our lemons. How do we turn those into lemonade (or something edible)?

Enter our flock of spoiled rotten, ravenous, egg-laying waterfowl. They love eating insects, including Japanese beetles, but since Japanese beetles typically fly and set upon leaves well above the bill-snapping range of our ground-dwelling, flightless ducks, they aren’t able to eat Japanese beetles without our assistance.

It’s a man! It’s a plane! No, it’s super duck, here to save us from eating boring ol’ chicken #eggs. #ducklove #welshharlequin #ducks #organiceggs #growjourney A photo posted by Tyrant Farms (@tyrantfarms) on Aug 30, 2014 at 9:13am PDT

(Photo: Welsh Harlequins are a flightless duck breed. Not even the powerful SuperDuck can fly.)

We’ve heard people say that Japanese beetle traps don’t work — or even worse, they actually attract more Japanese Beetles to your property. However, the research is actually mixed on the subject.

Some research has shown that when used properly, Japanese Beetle traps can actually be quite effective. We’d advise you to read a bit more about that research here, and to also read the actual research papers referenced (if you want to get more geeky).

First, put your traps 30 feet away from any valuable plants (example: fruit trees) OR put the traps in the middle of your duck/chicken area.

If you live in a sparsely populated area, you could even set the traps up far away from your garden or orchard areas, then “harvest” the insects daily for your hungry fowl.

Once per day, dump the trapped beetles into a bowl of water and let your ducks, chickens, turkeys or other fowl enjoy a protein and vitamin-rich feast. *Warning: If you don’t dump the beetles into water, they’ll fly away.

Be sure to empty your Japanese beetle traps daily, since the smell of dead beetles may detract living beetles from coming to the trap.

If you’re setting up your Japanese beetle trap in your chicken/duck run, another option (pictured below) is to set your trap up with the bottom open right over the top of a bowl of water. This way the bugs fall through the trap and into a bowl of water, where your flock eats them. You don’t have to empty or clean the trap!

This method provides your fowl with a steady stream of insect snacks throughout the day, rather than one single gorging at night. The downside with this option is that a strong wind/storm could reposition your trap, allowing the beetles to escape. So you may want to tie it in place/to the ground so it doesn’t move around. 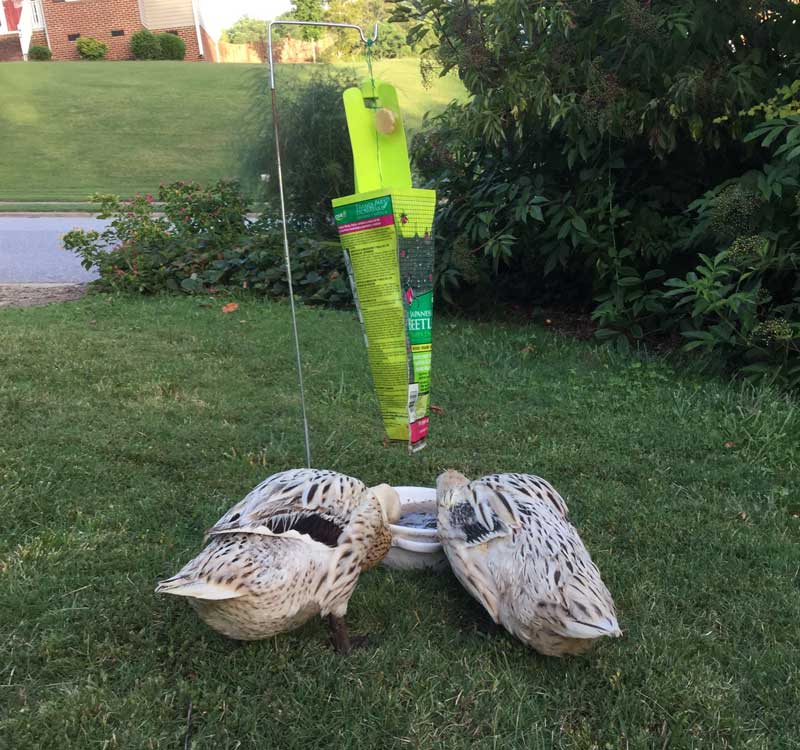 Nomnom! Ducks feasting on Japanese beetles falling from a trap into their water bowl.

Nutritional composition of insects (for chicken and duck parents)

Sure, insects are a healthy food source for your chickens or ducks, but what’s the nutritional composition of insects?

According to this FAO report:

“Rumpold and Schlüter (2013) compiled nutrient compositions for 236 edible insects, as published in the literature (based on dry matter). Although significant variation was found in the data, many edible insects provide satisfactory amounts of energy and protein, meet amino acid requirements for humans, are high in monounsaturated and/or polyunsaturated fatty acids, and are rich in micronutrients such as copper, iron, magnesium, manganese, phosphorous, selenium and zinc, as well as riboflavin, pantothenic acid, biotin and, in some cases, folic acid.”

Note that this analysis is based on “dry matter” and that the nutritional quality of living insects is likely much higher than dried insects. It’s also important to remember that insects are relatively high in phosphorus and low in calcium, two critically linked minerals that are essential to have in balance for healthy egg-laying ducks and chickens to maintain hard egg shells.

You CAN overfeed insects to your birds, causing a calcium deficiency which could lead to soft eggs, poor bone and feather health, and other symptoms related to calcium deficiency. Just as with people, a balanced diet is important, so just be mindful of this possibility with your flock’s food.

Our ducks gorge on Japanese beetles every June and have not had any resulting soft egg shell or other health issues. If you have far more Japanese beetles than your poultry can or should eat, you might also consider freezing them in bags and rationing them out during the fall and winter months.

Insects are a nutritional powerhouse that will aid in your poultry’s health, especially when they need higher protein diets during the laying season. So, why not take your problem (Japanese beetles) and turn it into a solution (edible eggs)?

Photo: Unlike Santa Claus, Santa Duck brings gifts to both good and bad ducks (like our hens).

We hope you’ve found this article eggselent and use these tips to help control your Japanese beetle problem organically!

Other 6-legged articles that will have you buzzing: