Want to take a look inside the nest of bald-faced hornets? 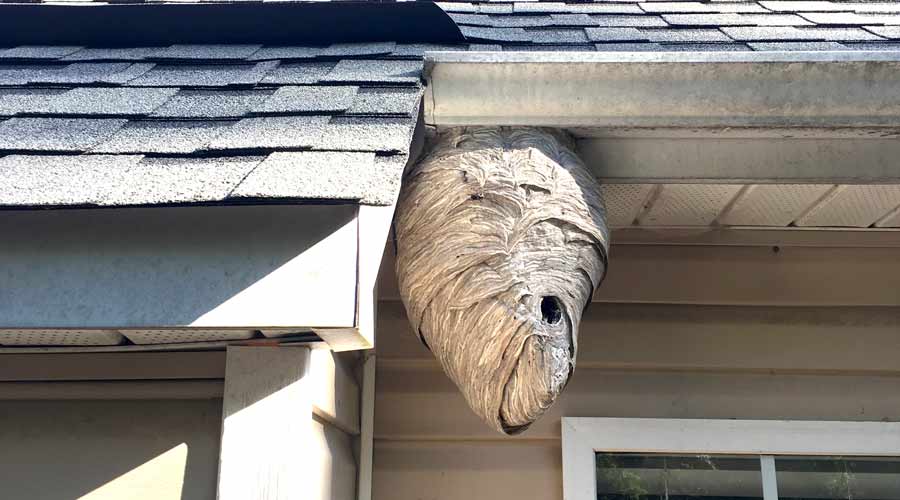 Tyrant Farms is reader-supported. When you buy through links on our site, we may earn an affiliate commission. Learn more
381shares

Last summer, we had a colony of bald-faced hornets (Dolichovespula maculata) take up residence on our back deck.

We’re weirdos who are quite fond of insects. Usually, we’re more than happy to have predatory insects around to help us manage populations of pest insects in our organic garden — paper wasps, mantids, ladybugs, lacewing larvae, wheelbugs, Florida predatory stink bugs… our gardens are chock full of both predator and prey insects.

We see this every year, but it’s always amazing… This large green worm is a tobacco #hornworm, the larvae of the beautiful Carolina sphinx moth. They’re common pests that eat tomato and other nightshade plants (this one was on an Incan golden berry leaf). They’re one of our ducks favorite foods but they’re also a host for the larvae of beneficial predatory parasitoid wasps. The white spots sticking off of the green hornworm are the cocoons of metamorphosing parasitoid wasps. The parent wasps paralyzed the hornworm, laid eggs inside of it, and its larvae made a meal of the worm before forming the tiny white cocoons on its surface, out of which mature parasitoid wasps will soon emerge. Once the tiny adult wasps emerge from the cocoons the predator > prey cycle will start anew. How were our parasitoid wasps able to find the well-camouflaged tobacco hornworm hidden amongst all the leaves? The plant “told” the wasps where to look. As the herbivorous hornworm starts to chew on the leaves, the worm used a chemical called volicitin in its saliva to soften the tissue of the plant. A plant can’t run away, swat at the hornworm or scream for help, but it is anything but defenseless. When the plant’s immune system detects volicitin, a chemical “conversation” begins, although it’s not in the same language that people speak. Instead of crying “help!” the plant began releasing a set of airborne semiochemical compounds to alert predatory insects that there was a meal waiting for them, while at the same time alerting other nightshade plants in the area that a hornworm attack was underway. As a result, the parasitoid wasps were able to easily find their target and other nearby plants in our garden responded to the plant’s warning by boosting their own natural pest-repelling and insecticidal compounds to help them fend off a potential attack. Ecosystems are communities whose members thrive through collaboration, not just competition. Unfortunately for this hornworm, it happened to find itself in a well-guarded, interconnected community. #ecosystem #integratedpestmanagement

Did we really want 500+ worker hornets in our living space? 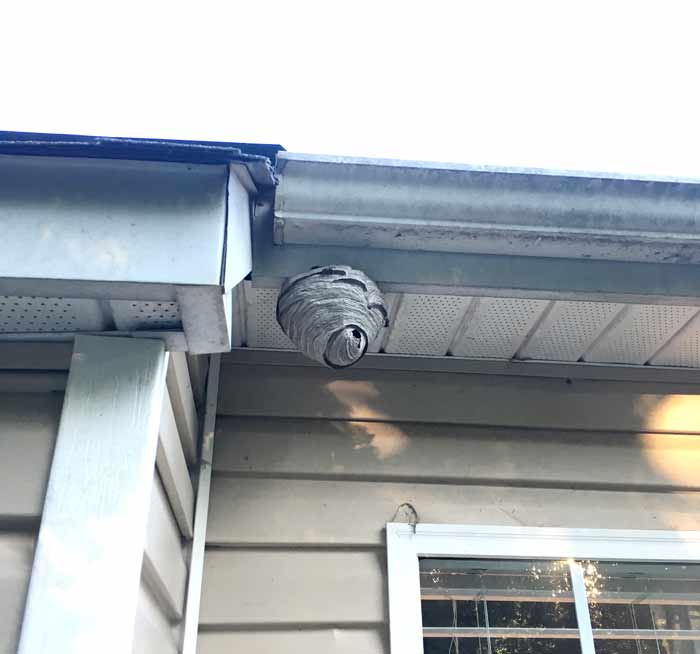 The bald-faced hornet nest on our back porch on July 9. You can see the outside layers under construction. The workers start each layer from the top down.

As the bald-faced hornet nest expanded in size and number of workers, we decided we’d take the hornet nest down.

Since I love insects, the thought of doing this made me a little sick to my stomach, but it beat having one of us (or a pet) get stung by the hornets.

So we picked up our neighbor’s bee suit and got everything ready for the removal of the bald-faced hornet nest.

Then The Tyrant and I made the mistake of reading more about bald-faced hornets from various sources, from Wikipedia to entomologists to university extension agencies. Our general philosophy is if we’re going to kill something, we at least have an obligation to learn about it so: a) we know we’re making an informed choice, and b) we know it’s necessary.

We also found out that bald-faced hornet nests are only active for one season. Before the first frosts and freezes of fall hit, the colony’s queen will have laid new queens that will fly out of the nest, become impregnated, and overwinter. When the weather warms, they’ll emerge to start new nests elsewhere.

All the remaining bald-faced hornets (including the queen) in the old nest will die with the onset of cold weather.

The next day, we returned our neighbor’s bee suit. We decided we’d do our best to coexist with our bald-faced hornets for the remainder of the warm weather season rather than killing them. 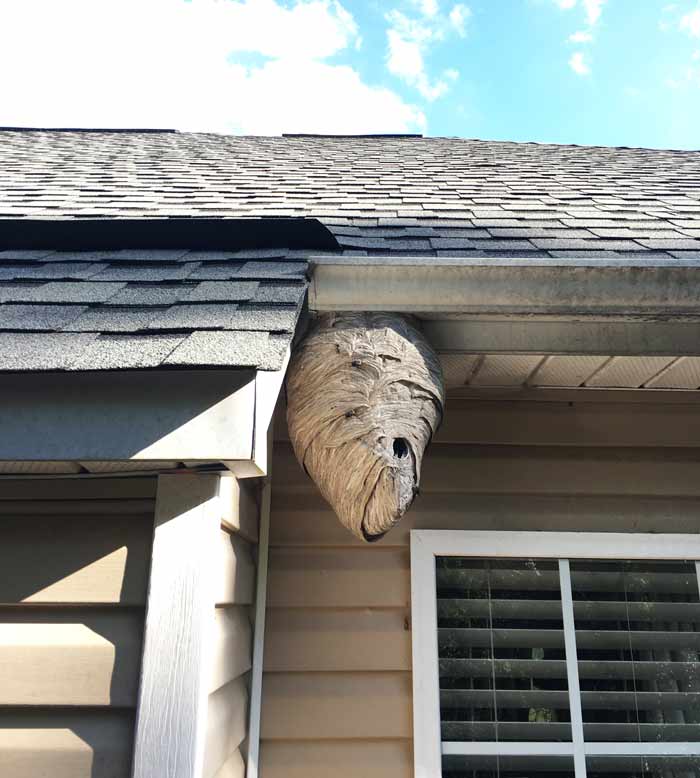 The same bald-faced hornet nest on Oct 13. This was its final size.

As best we can tell from searching our googler, nobody has ever died due to a bald-faced hornet attack. However, they do aggressively defend their nests, so anyone with small children or severe allergic reactions to their venom might view them as dangerous and prefer not to live near them.

Despite their scary reputation, our colony of bald-faced hornets seemed to recognize us and our cat as non-threatening since we regularly spent time on our back porch near their nest without ever causing harm or coming too close. Many times, I’d go well within 10 feet of the colony to observe them coming in and out of the nest’s single exit/entry hole, often carrying caterpillars and other insects they’d hunted in our garden.

We’re probably a little nuts, but when we noticed bald-faced hornets forming a colony next to our back porch early this summer, we had a decision to make: Option 1: Borrow our neighbor’s bee-keeping suit and plop the nest into a bucket of water, killing the colony. Option 2: See if we could co-exist with the hornets (technically wasps). Since they’re amazing predators and pollinators, we went with option 2. The colony is now nearing the end of its life cycle. Despite spending lots of time on our back porch, we never got stung or felt threatened by them. They hunted and pollinated our plants all summer long, helping keep pest populations in check and plants pollinated. All the males and workers are soon to die with the onset of cold weather, and a pregnant overwintering female will start a new colony next spring. We’ll move this nest to the woods during winter, and hope to see these insects back again next summer. While we wouldn’t necessarily recommend a strategy of coexistence to anyone in this predicament (especially those with children), it was another interesting learning lesson for us. We’re grateful to be part of such an extraordinary ecosystem, and are glad to provide a little patch of safe habitat in a world where so many insect species are either rapidly declining or going extinct due to habitat loss and pesticide exposure. The experience left us oddly hopeful that human beings will figure out better ways to foster mutually beneficial relationships with other species (even the scary ones) who share this little blue dot with us. #baldfacedhornet #entomology #predatoryinsects #pollinators

What’s inside a bald-faced hornet’s nest

Last week, we used a knife to cut the nest off of the porch overhang and to take a closer look at the structure inside. As you can see in the photos below, it was amazing! 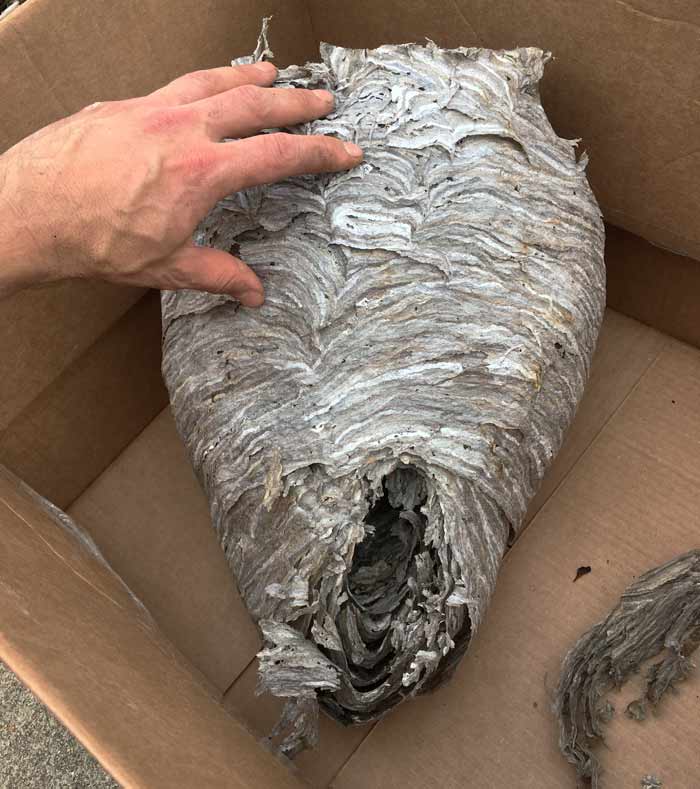 Here’s the bald-faced hornet nest in a box immediately after we cut it off of our roof overhang. You can see that the nest remained largely intact throughout the winter, despite numerous severe storms. The only visible damage is around the entry/exit hole. 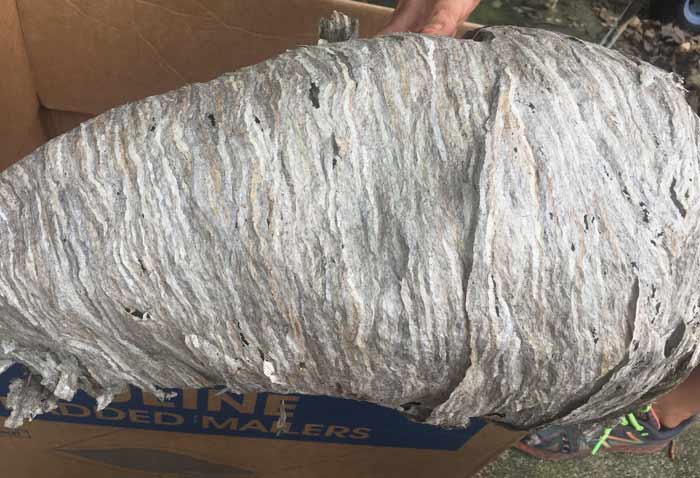 Here’s a closer look at the back side of the hive. The texture, color, and detail of the paper is absolutely extraordinary. Bald-faced hornets chew up wood and other fibrous materials to make this paper.

A closer look at the bald-faced hornet nest paper. Aren’t the various layers of color extraordinary? We saved a bunch of this paper to make into human artwork. 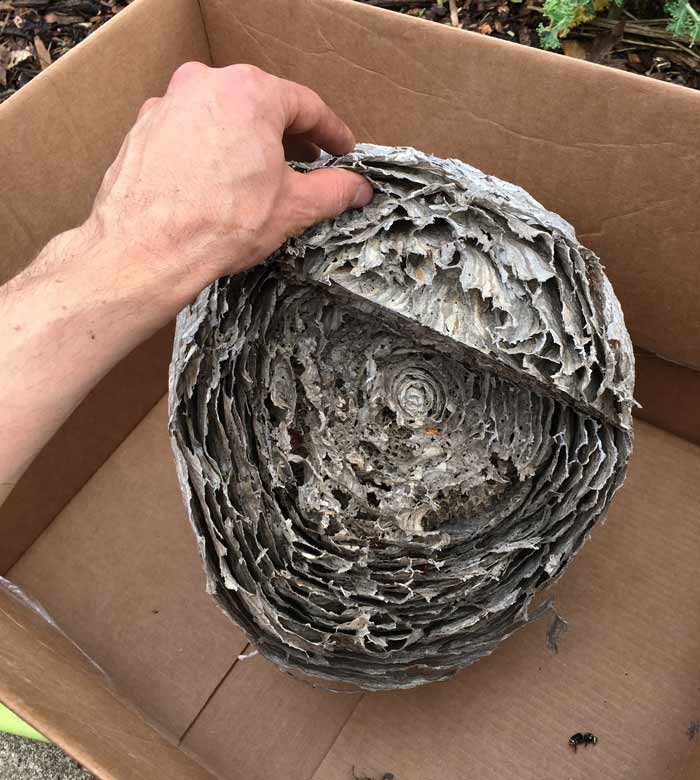 The beginning of the bald-faced hornet nest dissection – here’s a cross-section view. Imagine the amount of time and work it took for these little insects to construct each layer of the nest. The nest seems highly multifunctional, serving as protection from predators/parasites, protection from weather, and insulation to regulate internal temperatures. Perhaps the colors on the paper even serve as a social statement about the health/wellness of the colony to other nearby bald-faced hornets, in the same way that humans adorn themselves and their possessions with jewelry, makeup, clothing, paintings, etc. 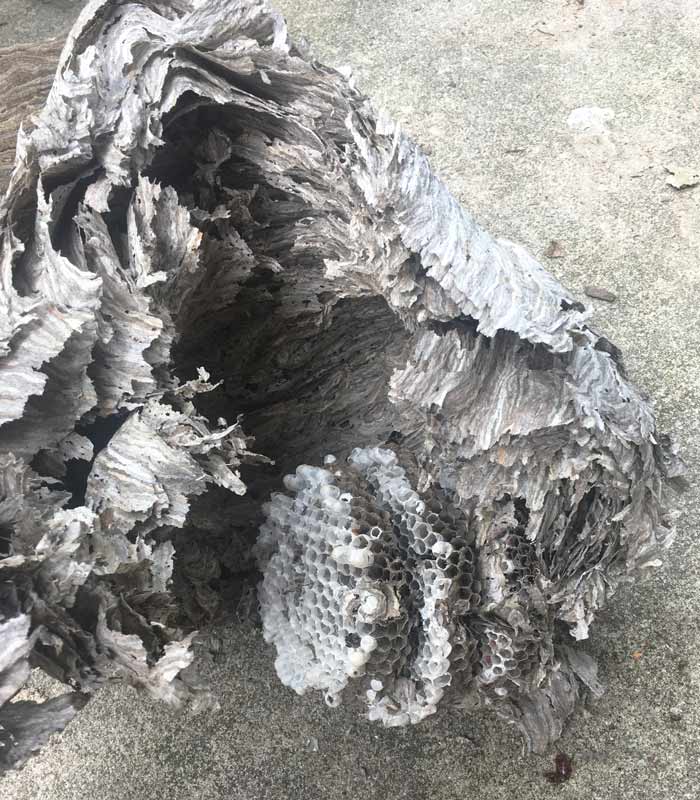 The internal breeding combs where new bald-faced hornets are raised. This nest had a stack of three combs inside. 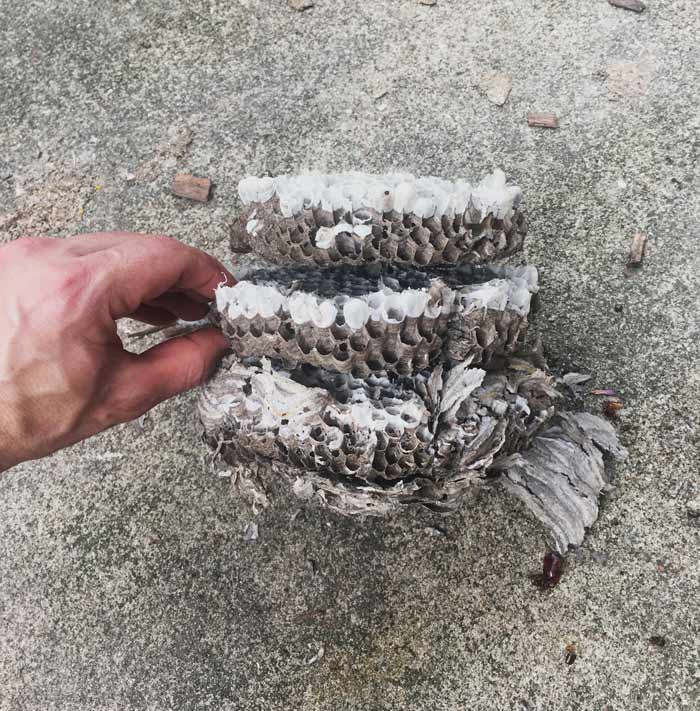 A closer look at the combs inside the bald-faced hornet nest. 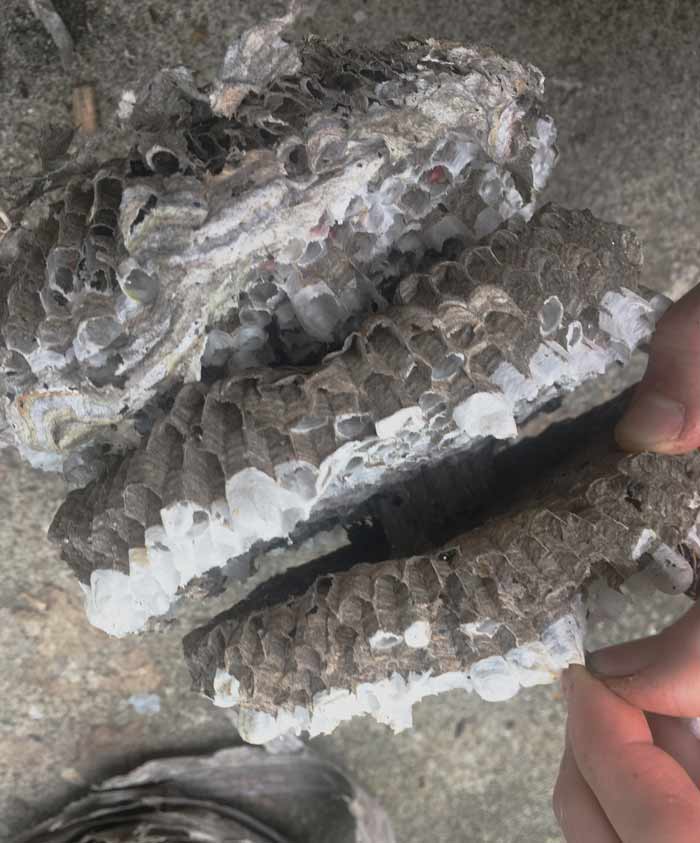 Here you can see a dense internal paper shaft/stem in the center that links the combs together and provides the foundational structure for each comb. 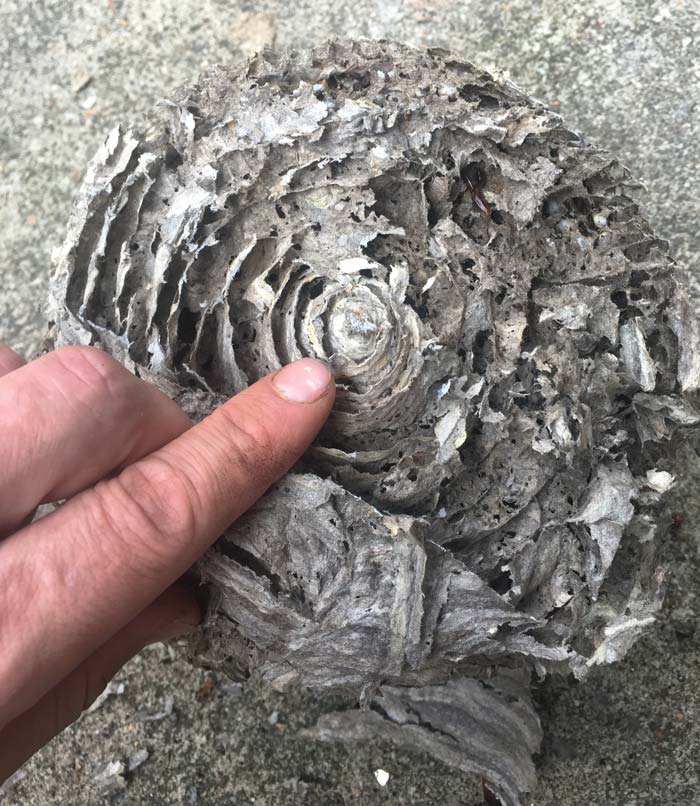 Here’s the top of the comb where it originally attached to the inside of the nest. The outer nest layers were all attached to the overhang on our porch, rather than having a single point of contact. 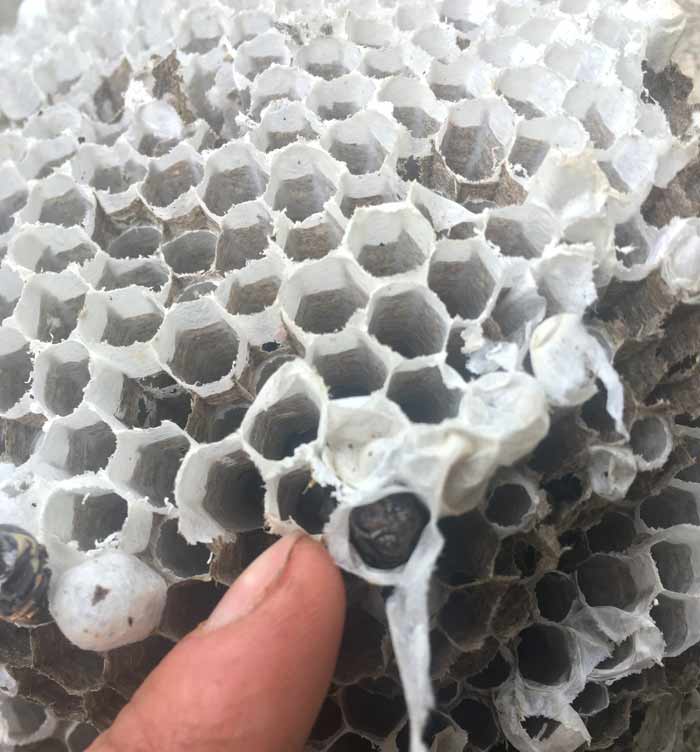 A closer look at the comb… Each cell represents a new bald-faced hornet (workers, drones, or future queen). The cells that are opened hatched last summer. The ones that are closed never had time to hatch before cold weather hit. Here, we tore open a cell to expose a hornet that died before emerging. 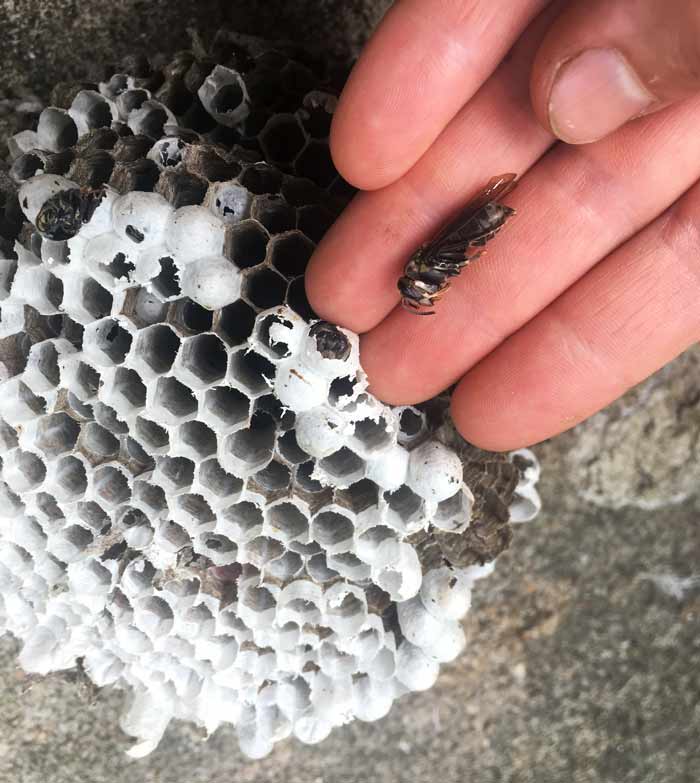 A dead bald-faced hornet was laid late in the season and didn’t have time to emerge from its cell before cold weather struck. The colony dies at the end of each season, but not before producing queens that fly off and overwinter elsewhere before starting new colonies the following spring/summer.

Insects play so many vital roles in nature. They’re nutrient recyclers, pollinators, predators, food for larger organisms, and so much more.

It’s no stretch to say the survival of insects is critical to the survival of human beings. Yet you may have heard about the massive declines in insect populations around the world in recent decades.

Well, here are a few things you can do about it right now…

Have a yard? Recognize it as potential habitat for trillions of above and below ground insects. Grow a diversity of plant species, especially flowering plants, using organic growing methods. In fact, we recommend turning your yard into an organic edible landscape which makes a lot more sense than simply growing grass.

Perhaps most importantly, take an interest in nature (which you’re a part of, not apart from). It’s abso-fricking-lutely amazing what’s happening all around us all the time. We’re often completely oblivious to it because our brains don’t have the knowledge necessary to allow it to come into view.

The more you know, the more you’ll be amazed — and the more likely you’ll be to create environments that have a regenerative ecological impact.

Now buzz along and get our top-10 tips for starting your organic garden, if this approach sounds like a good idea to you… 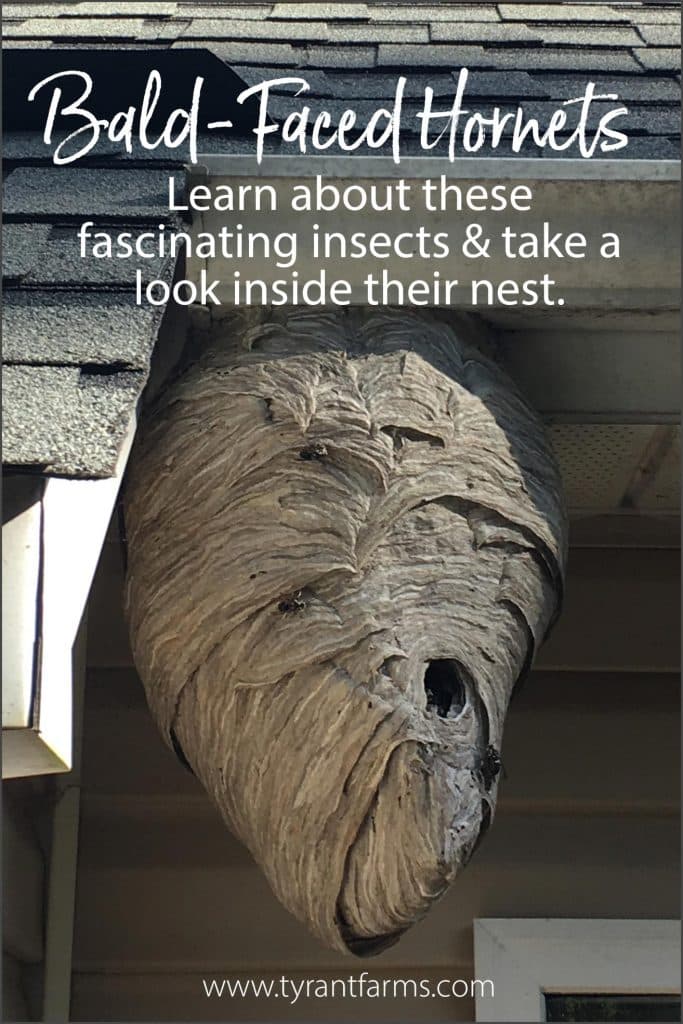 Food explorer, seed & soil geek, duck evangelist, writer, health nut, and entrepreneur. Aaron is farm manager at Oak Hill Cafe & Farm, a no-till, permaculture, farm-to-table restaurant & farm located right down the street from his alma mater, Furman University, in Greenville, SC. In addition to their collaboration on Tyrant Farms, Aaron and his wife, Susan, are cofounders of GrowJourney.com, a USDA certified organic seed & gardening education company. Aaron also writes for Edible Upcountry Magazine, WordPress (.com), Daily Harvest Express, and other food and tech-related organizations. He serves on the board of the Diversified Agriculture Committee for the South Carolina Farm Bureau.