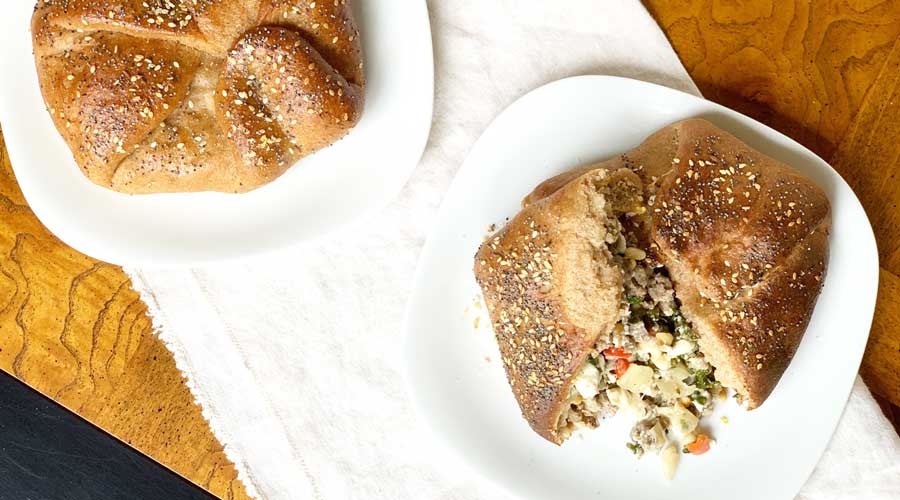 Tyrant Farms is reader-supported. When you buy through links on our site, we may earn an affiliate commission. Learn more
25shares

Poğaças are a delicious Turkish pastry stuffed with ground lamb, veggies, feta cheese, and fresh herbs. Here’s our spin on this classic recipe that you can make either in a wood-fired cob oven or an indoor conventional oven.

Years back, The Tyrant and I were shopping at Swamp Rabbit Cafe & Grocery here in Greenville. They’re a local grocery/cafe that sells lots of locally-sourced and organic produce and meats.

Mary, one of the co-owners, is a delightful young lady from Turkey. The influence of her Turkish heritage can be seen in little touches on the cafe’s menu.

On the chalkboard menu, one of the cafe’s items was meat or vegetarian poğaças. The Tyrant and I had never heard of such a thing, nor did we know how to pronounce this strange new word. We could see into the glass display and tell that they were some sort of savory baked pastry.

“What’s a poe-ga-kas?” I asked. The cafe waiter smiled and used his insider knowledge to inform us that the word was pronounced “pu-wa-cha” or, spoken quickly, “pwa-cha.”

“It’s a delicious savory pastry from Turkey that Mary wanted us to offer in the cafe.” Always interested to try a new food, the Tyrant and I were soon sitting at a table chowing down on our first-ever poğaças. We were hooked. Pastry on the outside, savory goodness on the inside.

“We should make these at home in our wood-fired cob oven,” The Tyrant exclaimed between bites. And now here we are… 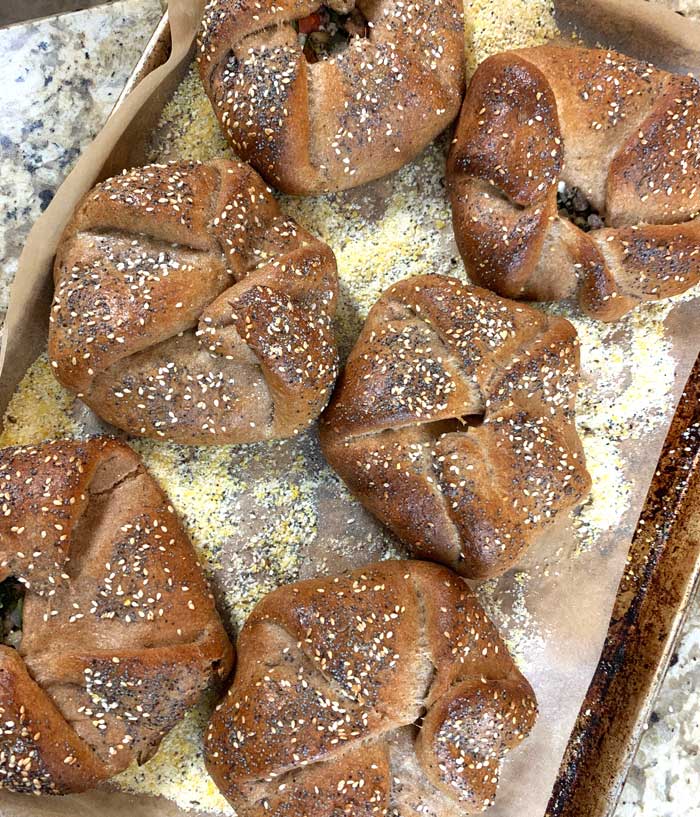 Homemade wood-fired poğaças, fresh out of our cob oven!

No, you don’t have to have a wood-fired cob oven to make this recipe

While we made these poğaças in our wood-fired cob oven, you do NOT have to have a cob oven to make this recipe.

A conventional oven will work just fine. However, we won’t lie to you and tell you that anything you make in a gas or electric oven will come close to tasting as good as it would if you make it in a wood-fired oven. It won’t!

A nice batch of whole wheat sourdough bread from our cob oven. Whether you want to make your own cob oven or learn how to cook in a wood-fired cob oven, we’ve got you covered!

How to make poğaças: step-by-step

This is a relatively advanced recipe, so we want to make sure you have some step-by-step process photos to help you along the way, especially on the bread/pastry side of things…

First, a few differences between our recipe and more traditional poğaça recipes:

If you have a garden, use it — and be creative! For instance, when making this round of poğaças, we used: 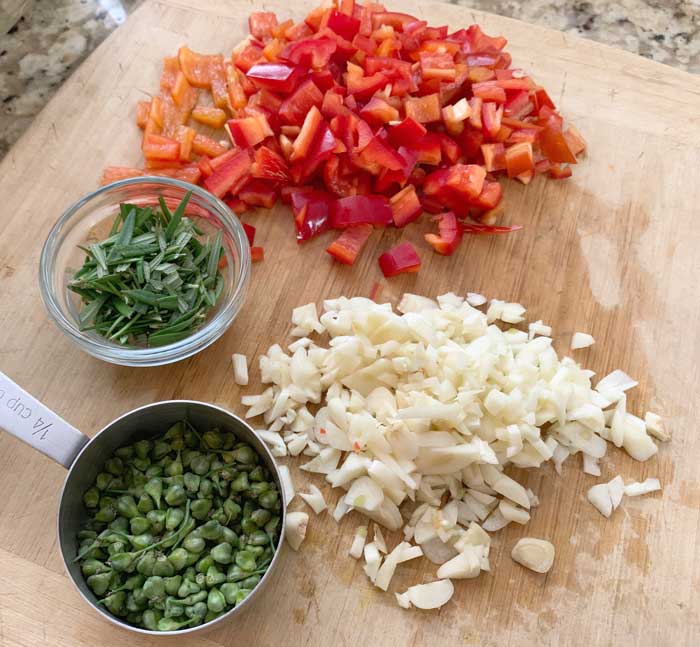 While you can certainly make excellent poğaças using dried herbs and store-bought ingredients, fresh herbs and unusual garden produce takes things up a notch or three.

Poğaça filling ready to go! As you may be able to tell from the picture on the right, we realized at the very end that we forgot to add the parsley, a key ingredient. That’s why it’s bright green (it wasn’t cooked with the rest of the filling). No worries, the poğaças turned out fine regardless.

As mentioned previously, we used organic stone ground, whole wheat bread flour for this recipe. Every type of flour is a little different, so if you’re using white flour, pastry flour, or even a different brand of flour, you might need to do a bit of ingredient improvisation to get to the ideal final dough consistency.

Our recipe produces a bread-like covering with a nice, crusty surface.

Step 3: Shape and stuff the dough with the filling. 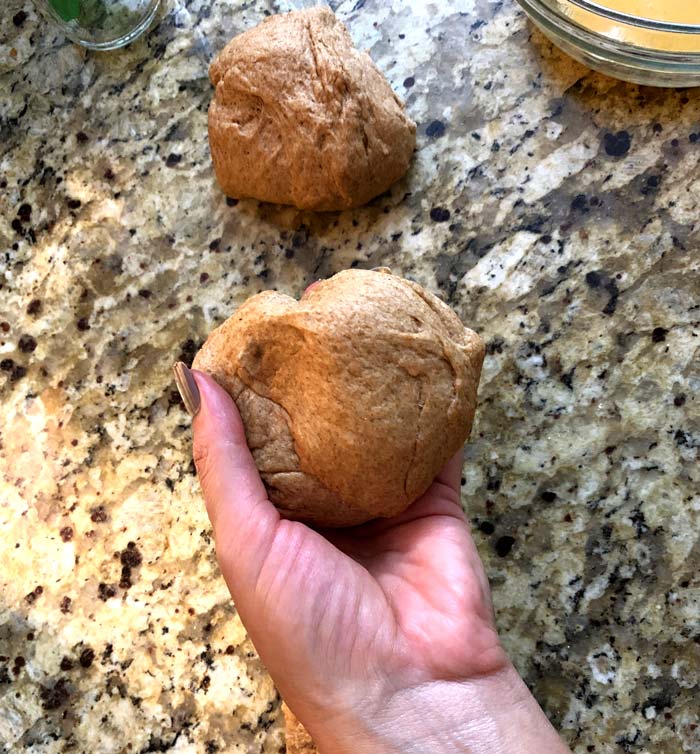 The dough for each poğaça should be a little bigger than a baseball. You’ll want to separate the dough into individual balls before proceeding. 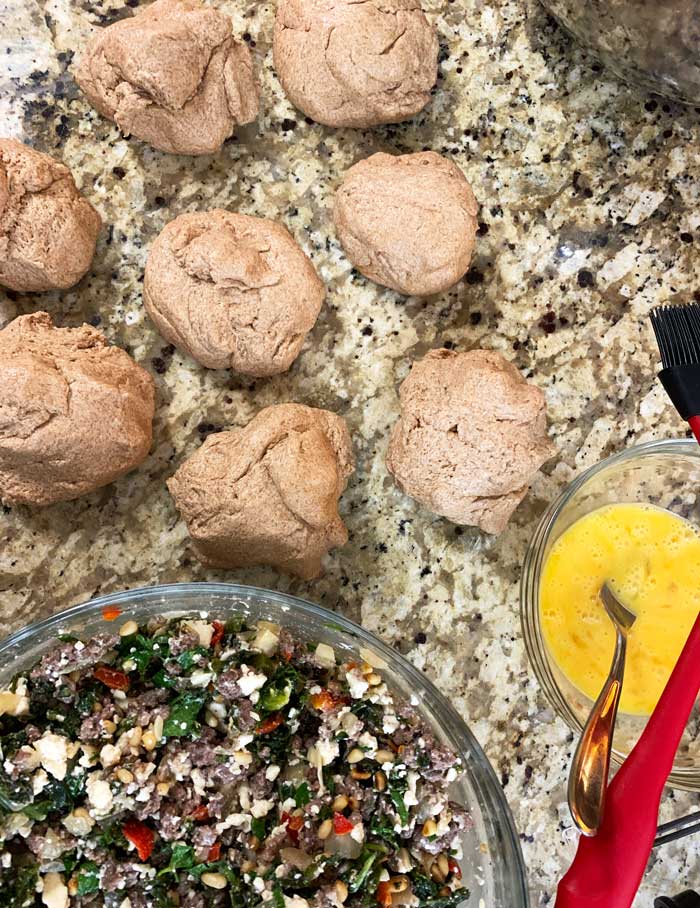 Here you can see the poğaça dough made into balls, the filling, and the egg coating that you’ll paint the surface of the finished poğaça with (“egg wash”) in order to help the seeds stick to the surface + give the baked poğaças a beautiful finish. 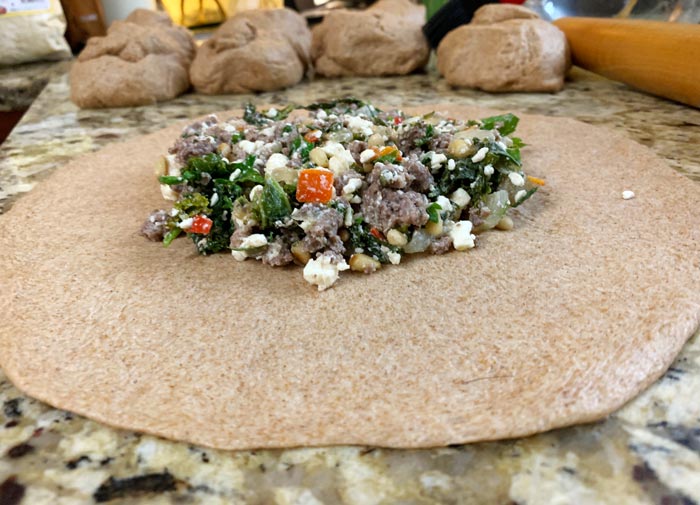 Roll out each poğaça dough ball and add the filling into the center. TIP: Make the dough in the center of the circle a little thicker than the outside edges. This helps the center support the mass of the filling. Plus, you don’t need really thick bread folds on the outsides/top of the poğaças. 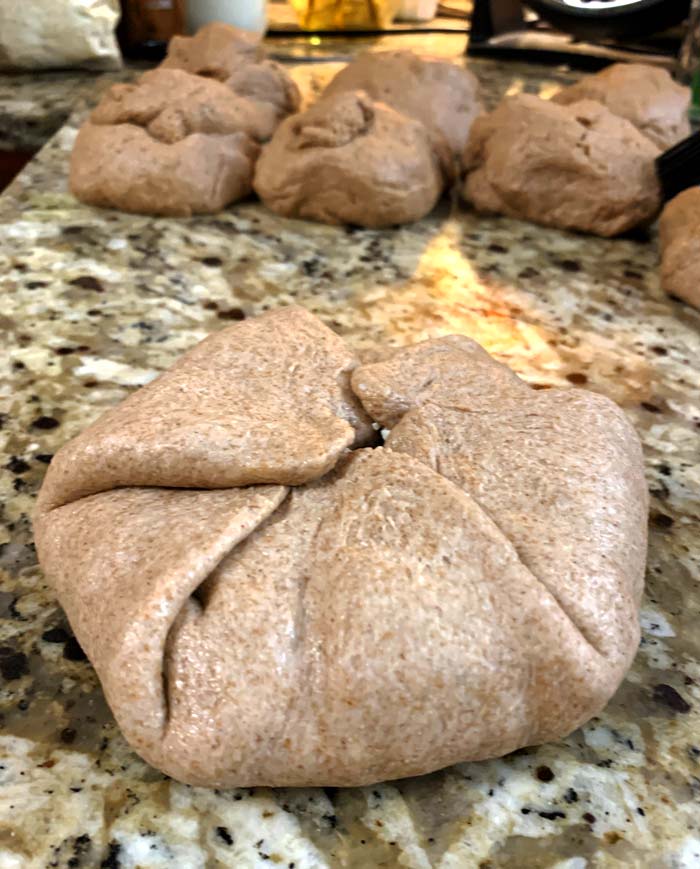 A folded poğaça ready for an egg wash + seed coating.

How do you fold a poğaça?

Here’s a quick video of The Tyrant doing it with one hand! (I was outside tending the cob oven.) 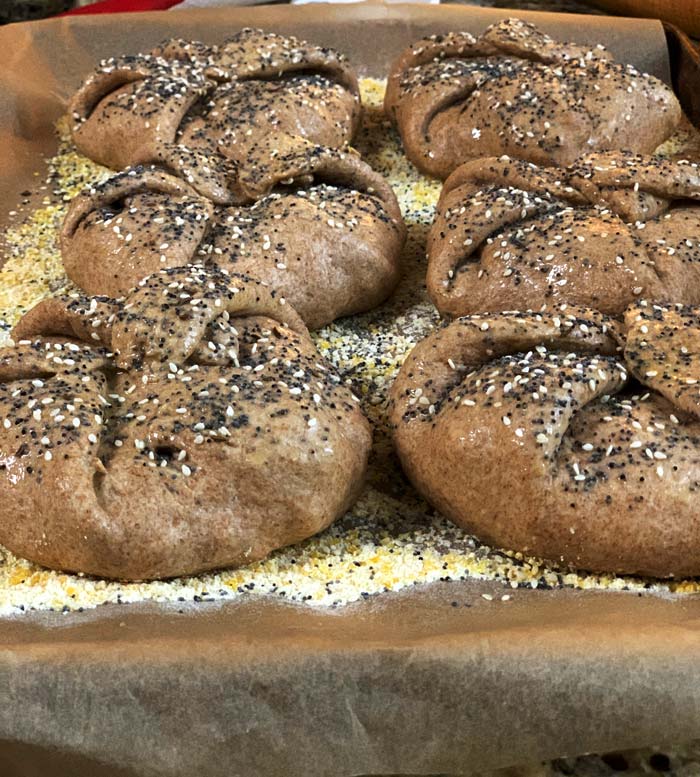 Place each finished poğaça onto a cookie sheet that has a thin layer of cornmeal on it. The cornmeal keeps the poğaças from sticking to the sheet or to the spatula as you’re transferring them into your wood-fired oven. If you’re using a conventional oven, you don’t have to use cornmeal. Instead, just put your poğaças straight on to your cookie sheet or parchment paper before baking.

If you’re using a conventional oven, just skip this section and go right to the recipe card. If you’re baking this recipe in a cob oven, read on!

We’ve done quite a bit of cooking in our wood-fired cob oven over the years, and have developed some of our own unique prep/cooking methods that we find to work better than what we’ve seen recommended elsewhere.

For instance, unless we’re doing a large bake with lots of different dishes being cooked over several hours, we don’t do a 3+ hour warmup that’s often recommended. For this recipe, we did a warmup with a small fire over 1.5 hours, which ultimately produced 4 large and 6 smaller poğaças.

Before cooking, we scraped the coals to the back and sides of the oven (see below), put the water-soaked door on the oven mouth with a slight crack to let smoke out, then gave the fire brick surface about 5 minutes to cool down before we started baking.

The total cook time for three rounds of poğaças was about 20 minutes – about 5 minutes for each round of poğaças with a ~2 minute transition between each round to remove and replace poğaças. Yes, this is WAY faster cook time than a conventional oven due to the cob oven’s extreme heat + the combination of convection, radiation, and conduction.

Rather than pulling all the coals and fire out of the cob oven before cooking (which is often recommended), we instead push the coals/fire to the back and outside walls of the oven using a metal hoe. 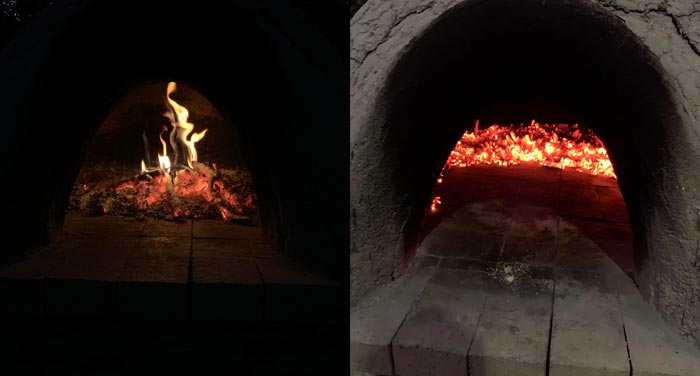 Left: The fire and coal pile inside the cob oven BEFORE we started cooking. It’s a bit dark, but the fire/coals are in the center of the oven floor. Right: The interior oven now ready to cook. I used a metal hoe to scrape the coals to the back and outside walls, clearing off the cooking surface. To clean off the residual ash on the cooking surface, you can either use a clean, damp mop or (what I prefer) a very quick sweep of the surface with a thick oven mitt. You can also see the small pile of flour tossed onto the cooking surface to test how quickly it browns.

This does three things:

This method does mean that you’ll need to periodically turn whatever items you place in the oven so as not to char one side of them, since more heat is coming from the direction of the coals than from the mouth of the oven. We do keep the water-soaked door on — and slightly cracked — while baking to trap heat but release any smoke.

I had an oven mitt over my hand and a large metal spatula in order to place each poğaças inside the 600+ degree oven without also cooking my hand!

We started with four large poğaças placed two-deep in the cob oven. 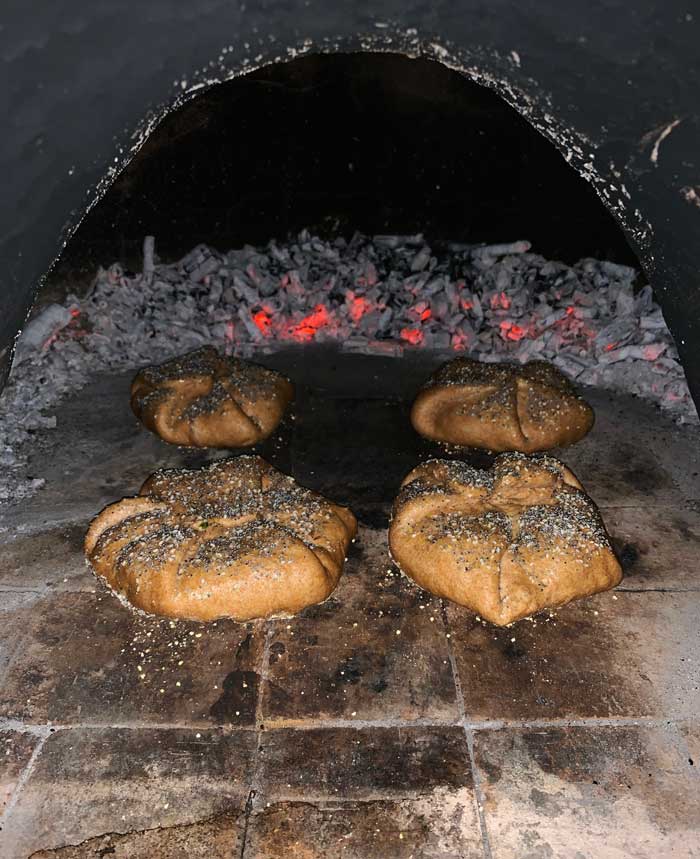 Round 1: Four large poğaças in the cob oven.

This didn’t work too well, since it made it hard to turn and move the back poğaças to the front and vice versa. The first round ended up with two of the four poğaças getting a bit charred on the side that started out facing the coals. 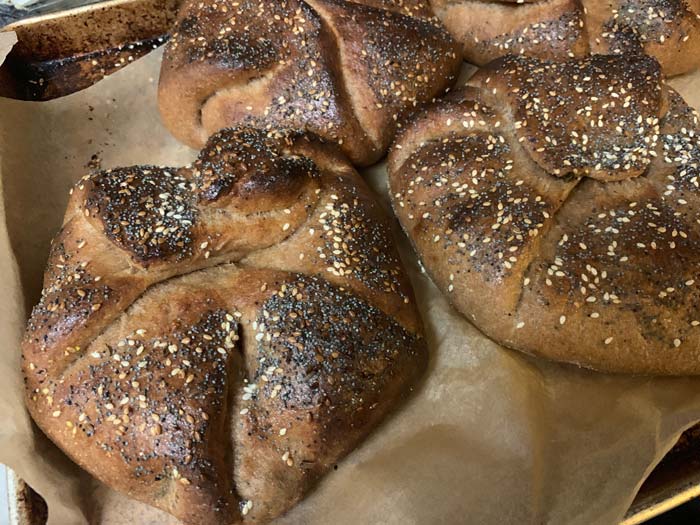 A closer look at the finished Round 1 poğaças. These turned out a little too blackened for our tastes.

For the six smaller poğaças, we placed them three across, rather than two deep. 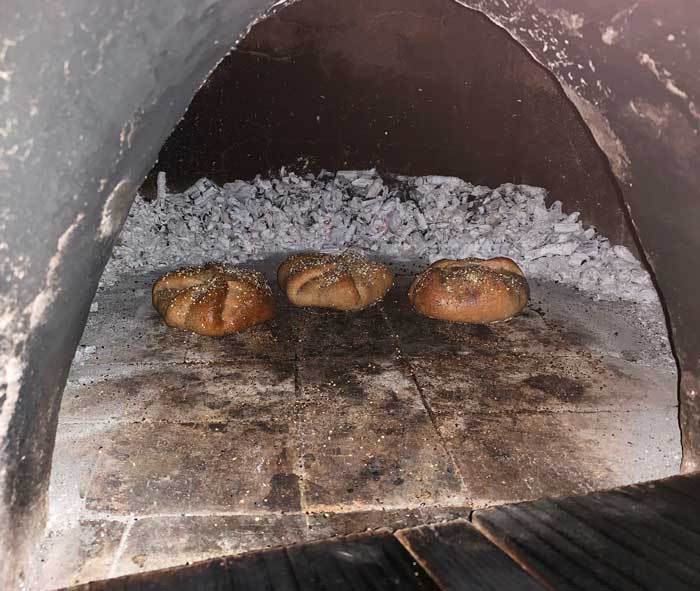 A single row made it much easier to get to and turn each poğaça.

After a couple minutes, we’d open the door, and use my oven mitt + metal spatula to turn the outside of the poğaças towards the inside facing the coals.

This worked perfectly, creating a nice even golden brown caramelized crust over the entire surface of the poğaças. Woohoo! 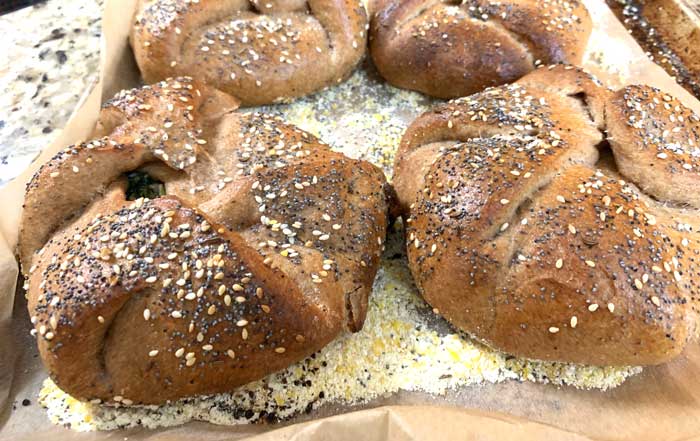 Final rounds of poğaças from our wood-fired cob oven, baked to golden perfection!

How did the poğaças turn out?

Some meals just don’t have adequate adjectives to describe how delicious and satisfying they are. These wood-fired poğaças fall into that category. 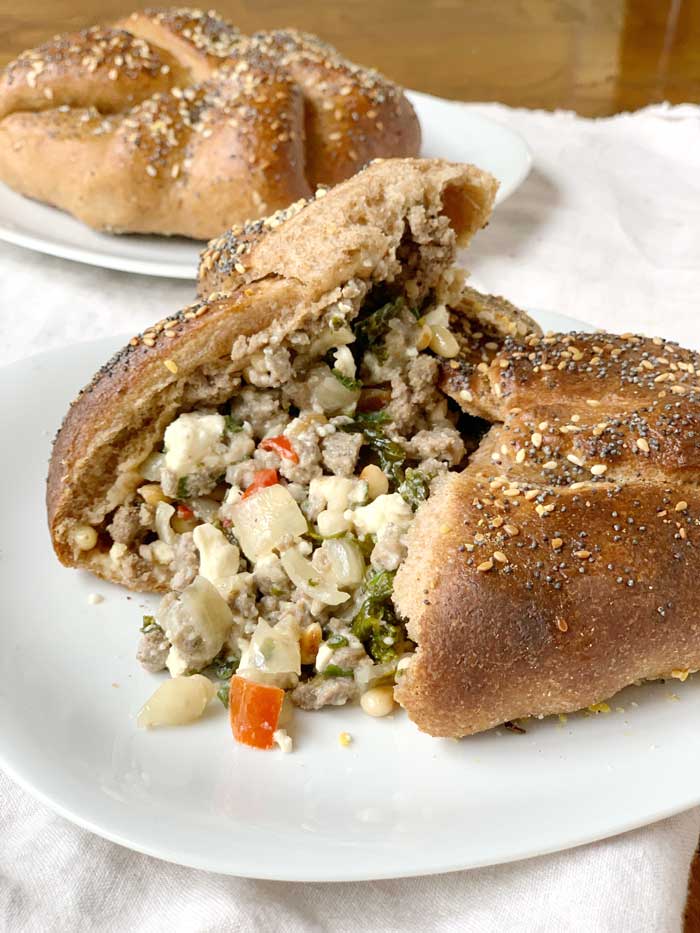 The last known sighting of this poğaça was on our dining room table. It hasn’t been seen or heard from since.

The only complaint we have is that we didn’t have family or friends over to enjoy them with us since we made them on a whim relatively late on a Sunday evening. Next time!

Poğaças (made in a wood-fired or conventional oven)

For making the dough and stuffing poğaças:

Whether you make this delicious savory poğaça recipe in a wood-fired cob oven or a conventional oven, you’re going to LOVE it! Thanks to Mary at Swamp Rabbit Cafe for originally introducing us to poğaças years back. 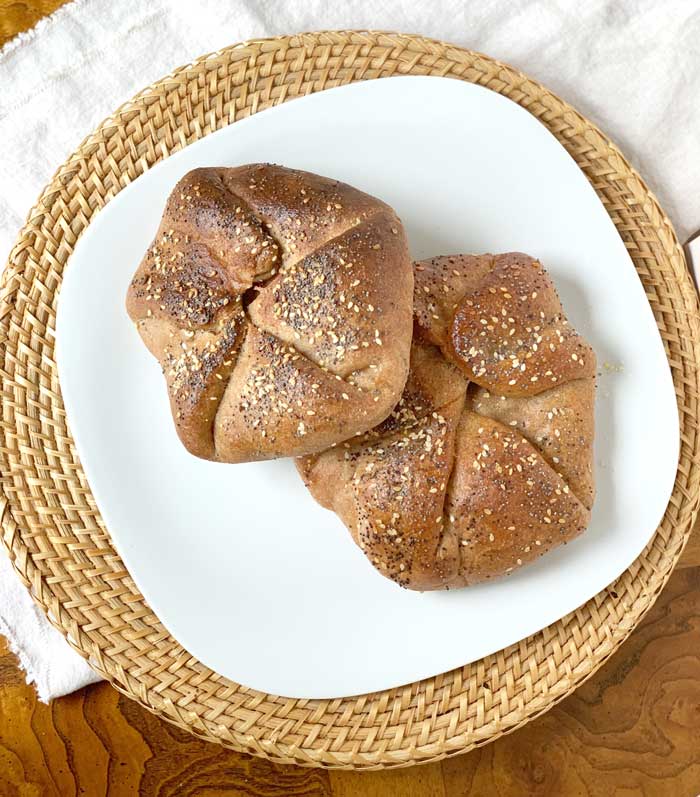 They’ve now become a treasured part of our culinary repertoire as well. 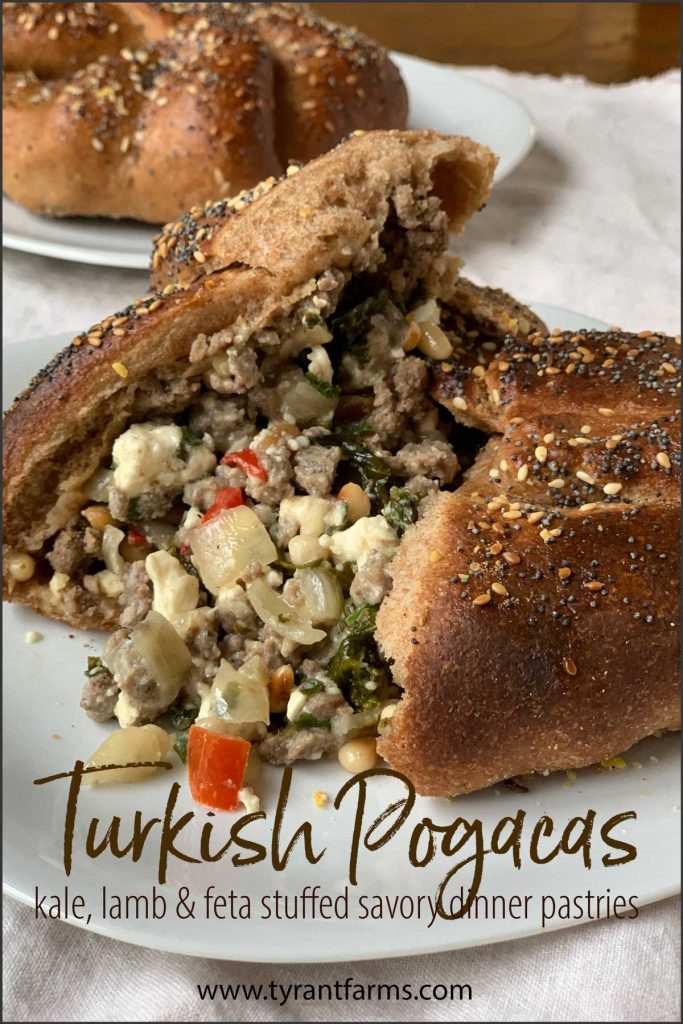