Tyrant Farms is reader-supported. When you buy through links on our site, we may earn an affiliate commission. Learn more
171 shares Muhammara — a delicious roasted red pepper dip — is a Middle Eastern dish that is by far our favorite thing to do with red ripe garden peppers. You’ll know why we love this recipe once you taste it…

Our introduction to muhammara

The Tyrant’s mom passed away in 2018. She was quite a character, and Susan has so many funny and loving memories of her.

Cooking was not one of her mom’s strengths, but she tried. In fact, the first time The Tyrant brought me to meet her family, she warned me about her mom’s cooking: “it’s awful,” she said. “Just eat it and know that you only have to make it through one weekend.” Yikes.

Suffice it to say that Susan’s descriptions were indeed accurate. So imagine our surprise when — months later — we brought my parents to to meet her parents and Susan’s mom made one of the best dishes we’d ever tasted. “Muhammara,” she said, beaming as we all stuffed our faces and complimented her on what an amazing cook she was.

What the heck is muhammara? 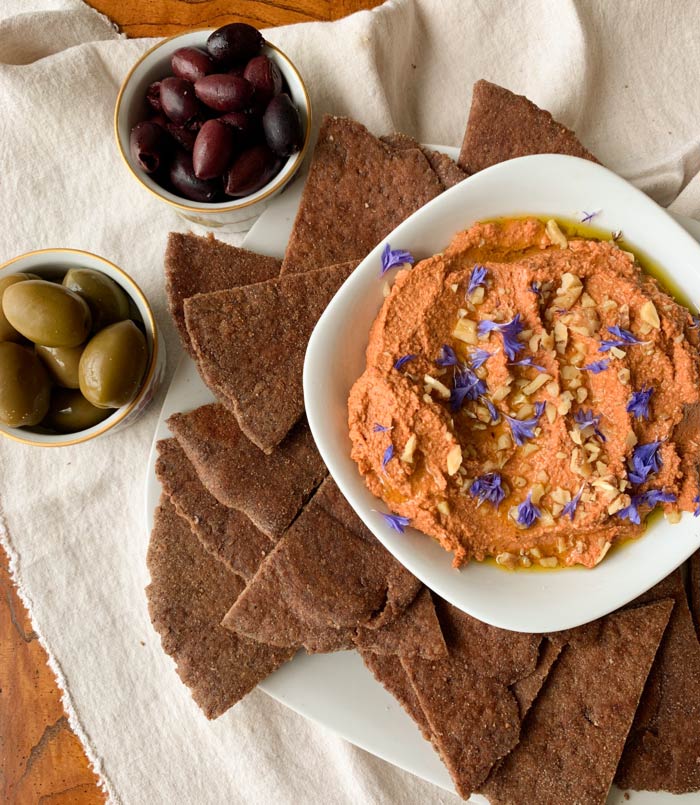 Mmm, muhammara (made with homegrown roasted red peppers) and served with our whole wheat flatbread.

Muhammara is a Middle Eastern dish originally from Syria and Turkey. (It’s also called “acuka” in some areas.) In case you’re trying to figure out how to pronounce muhammara, it’s moo-‘hah-mah-rha. There’s almost a little bit of “d” sound added at the beginning of the rha, too.

Muhammara’s exact ingredients and ratios vary by country, and probably even from town to town and house to house within countries. However, the basic ingredients of muhammara are:

How to use muhammara

We heard a Lebanese woman refer to muhammara as “Lebanese ketchup.” That is to say, they use muhammara on virtually everything, similar to the way Americans use ketchup. However, muhammara has a much thicker texture than ketchup.

Our favorite way to eat muhammara is as a dip atop pieces of our whole wheat flatbread and/or with sliced veggies. You can use it on sandwiches, wraps, meats, eggs, or pretty much anything else that needs a rich, savory yet sweet-tangy sauce/dip. 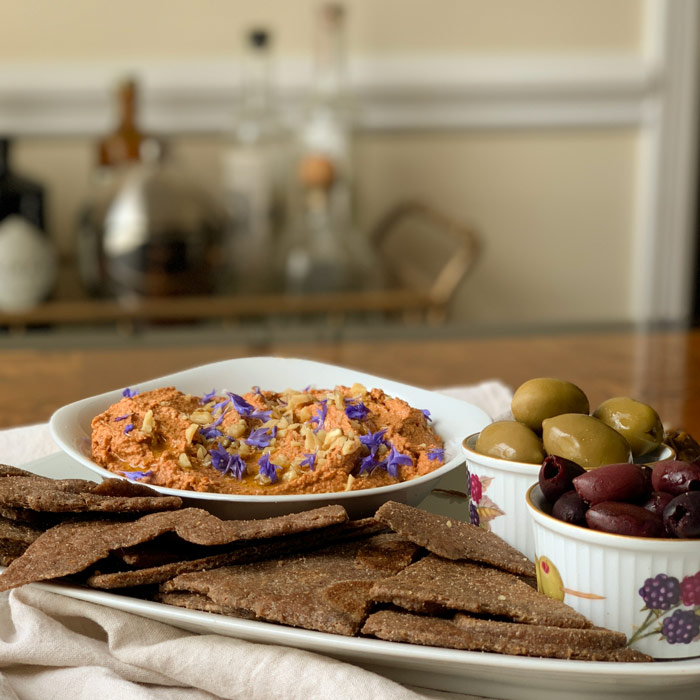 Muhammara is a summer staple in our house.

As with any recipe, quality ingredients are what makes the difference between ok and amazing.

If you want to take your muhammara game to the next level, we highly suggest you roast and/or roast and brine your own red peppers. This highly versatile ingredient can be used in lots of ways and can store in your fridge for up to a year.

Here’s the recipe we used. 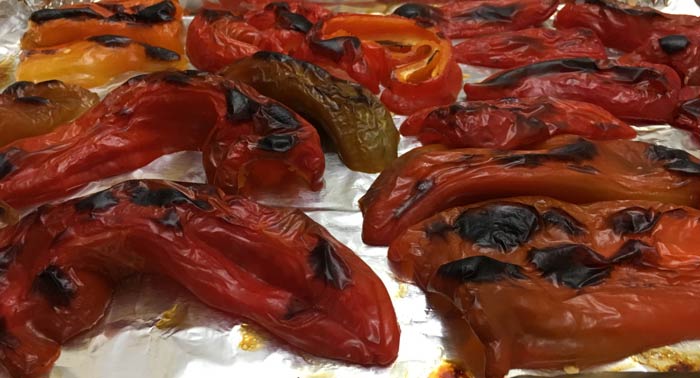 If possible, use homegrown, homemade roasted red peppers to take your muhammara game to the next level of deliciousness.

If you’re in a rush or you’d rather just get store-bought roasted red peppers, no problem. You can still make a mean muhammara. A delicious Middle Eastern dish made with roasted red peppers, pomegranate molasses, and walnuts. Sometimes referred to as "Lebanese ketchup" you can use muhammara as a dip or sauce on virtually anything!

We hope you enjoy muhammara — a delicious Middle Eastern roasted red pepper dip — as much as we do!

In loving memory of Laura Sebotnick, mother of The Tyrant, and the most dedicated cook ever. We’ll always remember you fondly when we eat muhammara.

Other recipes you’ll want to dip or dive into: