Tyrant Farms is reader-supported. When you buy through links on our site, we may earn an affiliate commission. Learn more
1.5K shares

Garden huckleberries (Solanum nigrum var. melanoserasum) are a fruit in the nightshade family that have earned a “must-grow” status in our summer garden. Here’s more about the fruit, plus a delicious garden huckleberry preserves recipe.

The many edible wonders of the nightshade plant family

Admittedly, we have a bit of an infatuation with plants in the nightshade family. Each year, our garden is loaded with eggplants, tomatoes, tomatillos, ground cherries, cape gooseberries, wonderberries, and other berries that all belong in the Nightshade family (Solanaceae).

Yes, tomatoes and eggplants are technically berries, not vegetables. Each nightshade is uniquely delicious in its own regard, and really shouldn’t be compared. We usually make savory dishes out of our eggplants, but have also made an acorn flour, eggplant cake that was to die for.

Most gardeners have plenty of recipes for tomatoes, but unless they’re familiar with Latin American cuisines, they may feel a little lost when it comes to preparing tomatillos (which are fantastic eaten raw, made into salsa verde or various cooked sauces).

Ground cherries and cape gooseberries rarely make it back inside because we devour them on the spot. When it comes to garden huckleberries or the closely related wonderberries, many gardeners haven’t heard of them, or if they have, wouldn’t know what to do with them at harvest.

The truth is that there is a huge range of nightshade berries that American gardeners either don’t know about or grow. We think there is enormous potential for many of these varieties to become popular with adventurous home gardeners and gourmet chefs. (Not to mention, the potential to breed “new heirloom” varieties.)

As it turns out, the names wonderberries and garden huckleberries are often used interchangeably, but they’re not the same plant. The berries of each are vastly different in both flavor and how they need to be prepared prior to consumption.

Both plants likely have a common ancestor in Africa, as this fascinating report from the National Resources Institute at University of Greenwich details. And, no, they’re not genetically related to true huckleberries in the Ericaceae family, which we call “blueberries” here in the southeast.

Wonderberries, a nightshade fruit dating back to (at least) the time of Luther Burbank, whose plant breeding work was the catalyst of plant patenting which started in the 1930s. These are quite good – very sweet with blueberry notes. You’ll never see these in a grocery store because picking the small berries is very tedious work and the thin-skinned fruits damage easily while picking giving them a very short shelf life. One of the nice things about gardening is profitability doesn’t have to factor into your plant selection. Your garden should be as weird as you are. 😛 #wonderberries #heirloomseeds #organicgardening #gardening #gardenideas #gardentotable

Wonderberries were bred by the famed botanist and plant breeder Luther Burbank, who introduced as many as 1,000 new cultivars of fruit trees, veggies, flowers and other plants during his remarkable career. Burbank supposedly bred wonderberries by stabilizing a hybrid between two other nightshades, S. villosum and S. guineense.

As the story goes, he then sold the rights to wonderberries to another seed company, which then renamed them “sunberries.” Apparently, this set off a feud between the company and Burbank that spanned decades, leaving his reputation somewhat tarnished.

Until recently, wonderberries’ scientific name was Solanum × burbankii, in honor of Burbank. However, they’re now technically supposed to be called Solanum retroflexum.

Further complicating matters: there is another plant in the nightshade family that also produces small, black fruits that sound very similar in description to wonderberries: garden huckleberries. 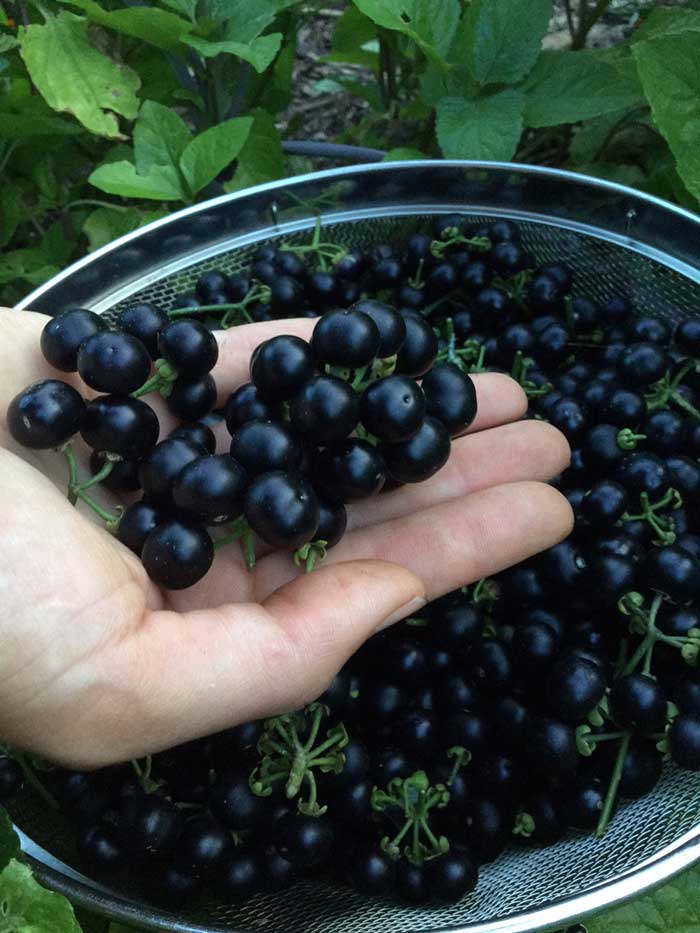 A nice harvest of garden huckleberries – this was a second harvest off of only four plants. The plants will continue to produce more berries throughout the summer.

The scientific name for garden huckleberries is often listed under Solanum scabrum or Solanum melanocerasum or Solanum nigrum, depending on which seed company or university extension you reference.

See why both the common and scientific names of wonderberries and huckleberries are often mixed up? Frankly, it’s very difficult to determine the correct scientific name for actual garden huckleberries. As best as we can tell from our research, it’s Solanum nigrum var. melanoserasum but that could change depending on which reference you use or future genetic analysis. 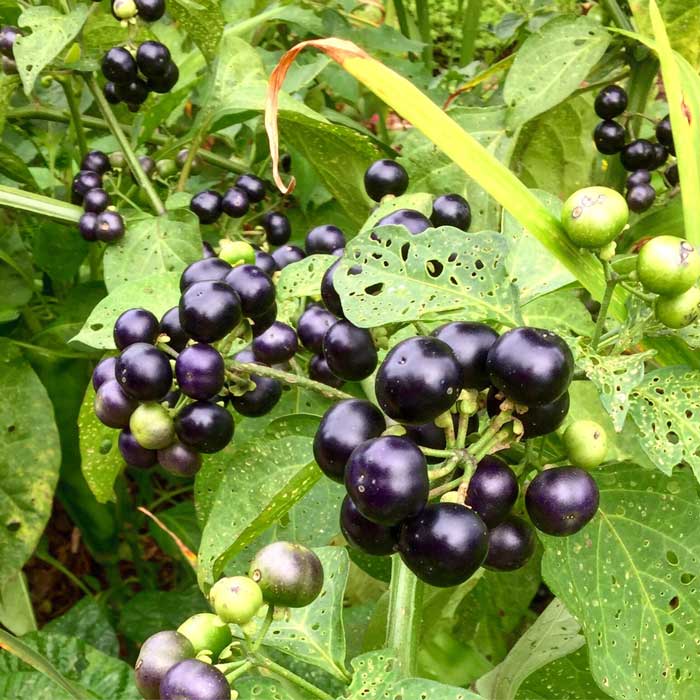 Beautiful clusters of garden huckleberries. You only want to harvest the berries once they’ve turned fully black in color and are very slightly soft when squeezed.

Their maximum height is about 2-3′. They get loaded with tiny green berries that turn black and soft when ripe. The ripe fruit is about the size of a small pea. Each plant will produce 3-5 cups of fruit in a growing season.

Garden Huckleberries are larger, very robust plants. Apparently some subspecies in tropical African climates can even be short-lived perennials. Our plants grow to be about 3-4 tall, and have a similar growth habit to a large pepper plant, although they produce longer branches.

All along the branches, clusters of berries form, turning from green to deep black when fully ripened. The mature berries are about the size of a big blueberry and have a tough, almost leathery skin. Each plant will produce 1-3 gallons of fruit in a growing season.

Wonderberries offer a pleasant, sweet flavor when eaten raw right off the plant. The berries are very thin-skinned and will fall from the plant when overly ripe.

They’re not quite as good as blueberries in flavor (in our opinion), but they’re definitely worth growing for fresh eating if you have the space in your garden or have some open pots. We’ve heard they make excellent pies and preserves as well, but we’ve never gathered enough to give it a try.

Garden huckleberries are not good eaten raw. They have almost no flavor (similar to a raw eggplant) and the skin is quite tough in comparison to a wonderberry.

They can be made into beautiful deep purple-colored sauces, pies and preserves—and the flavor is out of this world delicious. If you could combine the best flavors from blueberries and grapes into a single fruit, that’s what cooked, sweetened garden huckleberries (such as garden huckleberry preserves) taste like. 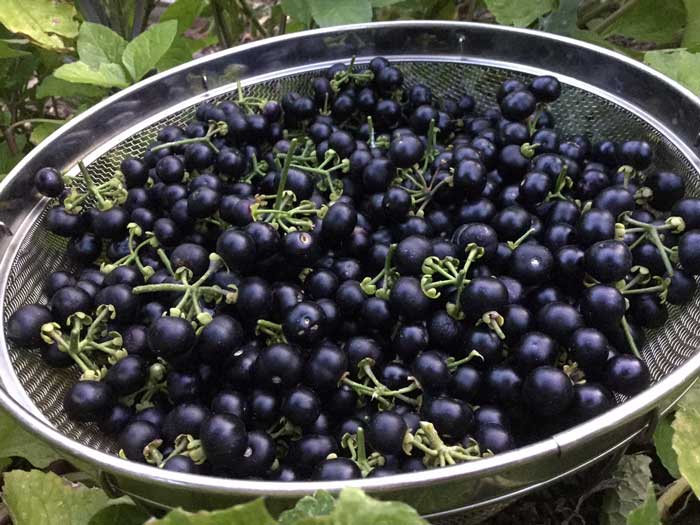 Be sure to remove the garden huckleberry stems before cooking. If you don’t have enough to make into a recipe right away, put them in the freezer and continue to harvest until you have enough berries. They’ll continue to produce well into the fall in our Agricultural Zone (7b).

Now that we’ve experienced how robust the plants are, how easy they are to grow, how many berries each bush produces, and the wonderful flavor their cooked berries have to offer, we’ve decided that garden huckleberries will be part of our summer garden every year hereafter. 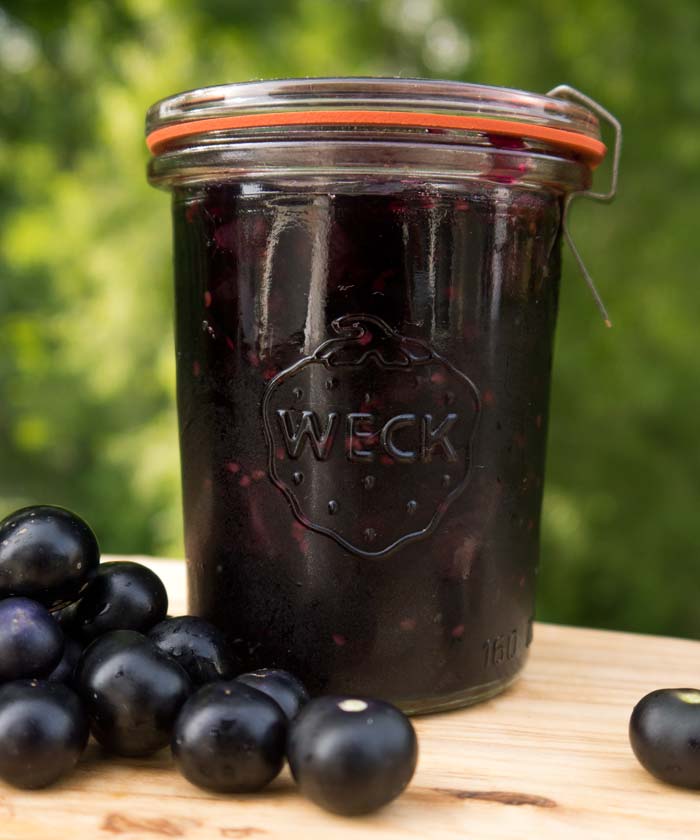 Here’s a simple garden huckleberry recipe to get you started in the right direction. Once you’ve had a chance to experience the primary flavors, you can start experimenting with future batches: pure vanilla extract and other flavors would likely add nice nuance and variation as well. 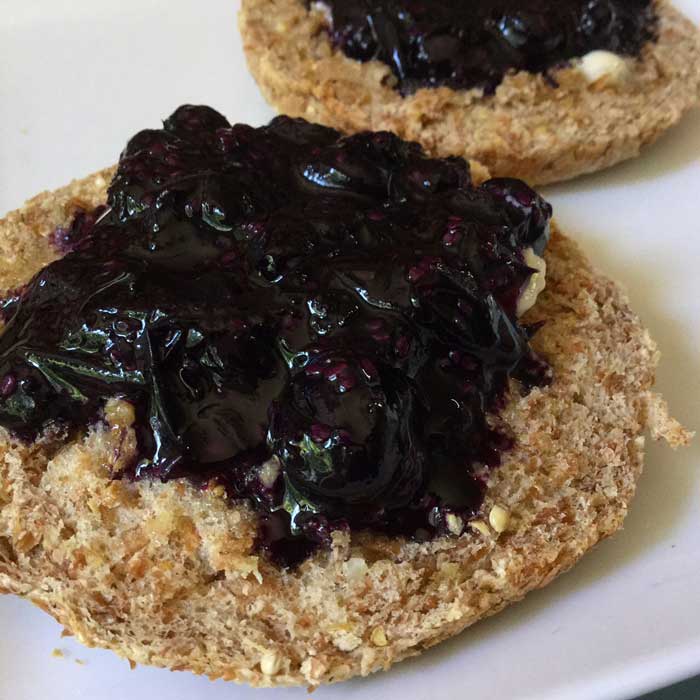 A delicious preserve made from a rare nightshade fruit that tastes like a cross between blueberry and concord grape jelly.

Now you know what garden huckleberries are and how to use them in the kitchen! You’re on your way to enjoying one of the most delicious preserves you’ll ever eat.