Tyrant Farms is reader-supported. When you buy through links on our site, we may earn an affiliate commission. Learn more
106 shares

American groundnut (Apios americana) is a native plant that produces a starchy, protein-rich tuber. Maitake mushrooms (aka hen of the woods) are a prized culinary and medicinal fungi. We set out to combine these two ingredients into one delectable chowder recipe…

Both of these foods are amazing in the kitchen. There’s also increasing evidence that they offer some pretty extraordinary health/medicinal benefits as we wrote about in our introductory articles.

American groundnut tubers are ready to harvest and eat in the fall. The same is true with maitake mushrooms.

These are precious foods to us – we don’t have a lot to spare. We only grow about 10 pounds of American groundnuts each year (though we plan to increase that quantity in future summers).

Maitakes are a rare mushroom for us, so we’re lucky to have enough excess to store a few pounds in the freezer at the end of our fall foraging season. This year, our prime maitake mushroom spot didn’t even fruit, so we’re down to the last of our previous year’s supply. 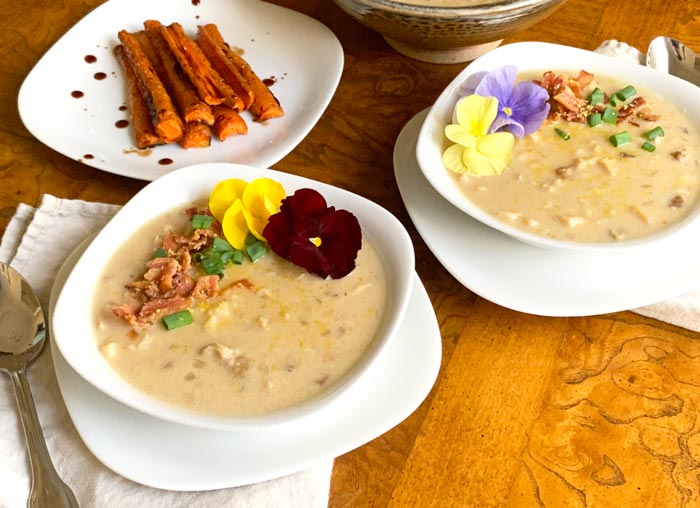 American groundnut and maitake mushroom chowder made with seasonal ingredients we value like gold.

Limited ingredients: no room for error

All this to say: our ability to make and refine recipes from these two ingredients is extremely limited. Our goal with this American groundnut and maitake mushroom chowder recipe is to get a good foundational soup recipe that we (or you) could build on with future iterations.

We think we’ve accomplished that aim. This chowder recipe is savory and full of nuanced flavors. The taste is similar to split pea soup with notes of boiled peanuts and umami/mushroom flavors.

The Tyrant makes fun of my infatuation with edible conifers. Every time we pass a conifer tree, I feel compelled to identify it and list its edible components. Hence our edible conifer guide: how to eat your Christmas tree.

For a few months, I’ve been itching to combine the following three flavors in one pot: With very limited time to spare on a recent weekend morning (due to toddler and Tyrant demands), I rushed out to gather the one ingredient I didn’t currently have in-house from a nearby foraging spot: spruce needles. The idea was to make a cooked spruce needle cream/milk using our recipe, which calls for a 1:4 ratio of needles to cream or milk.

Ideally, if you opt to use spruce needles when making this recipe, you’ll have 2-3 days for a cold infusion process to really get the spruce needle flavor to show up. I had about 45 minutes and only ended up with 1/4 cup of needles, which is far less needles than I needed to do a heat infusion (ideal would have been 1 cup of needles since I was starting with 4 cups of milk in the recipe draft).

All this to say: I screwed up. The spruce needle flavor didn’t show up in the final chowder, but the whole grass-fed milk I used was reduced by 1 cup in the process and was at least infused with a bit of extra nutrition from the spruce needles.

So should I tell you to also use spruce needles or not? To skip the spruce needles but still heat your plain milk until it reduces by 1/4? Or just use a cream-milk combo?

With our other recipes made with ingredients we have in abundance, we have the ability to retry and refine things to the point that all unknowns are ironed out prior to publication. Not so here, but we’re confident enough in the basics of this recipe that we’re sharing it anyway.

If you do opt to use spruce needles, please let us know how these three primary flavors combine – we’re dying to find out!

However, in this recipe, we figured the texture of the American groundnut skins would add an unpleasant grittiness and a less appealing color. Thus our recommendation: peel them before dicing and cooking. A carrot grater will do the trick. 2. Dice your peeled groundnuts into 1/4″ pieces.

The final texture of this chowder will be best if you cut your American groundnuts into very small pieces, about 1/4″ cubes. Unlike potatoes, they won’t turn to mush even when they’re well cooked. De-skinned American groundnut tubers diced into 1/4″ pieces – the ideal size for this recipe.

In the end, you’ll have small, soft chunks of groundnuts in your bowl. You could puree all the ingredients after cooking if you’d prefer, but we wanted a chunky chowder consistency.

3. Use this trick to clean your sticky knife after cutting groundnuts.

American groundnuts have a sticky latex substance in them that you don’t really notice when you’re cutting them. However, you will notice this latex on your knife when you’re done.

Nope, soap and hot water won’t remove the latex. A trick we learned from processing and eating jackfruit (which also have lots of latex in them) is to put a dab of cooking oil on a paper towel and wipe the blade clean.

The oil binds with the latex and removes it. Repeat 2-3 times until your blade is latex-free.

4. Dice your other solid ingredients (onions and maitake mushrooms) into 1/4″ pieces.

As with your American groundnuts, you’ll also want to finely dice the other solid ingredients in this recipe for a nice final consistency. Maitake mushrooms, onions, and American groundnuts all diced to about the same 1/4″ size and added to the pot for sautéing.

You can use fresh or frozen maitakes for this recipe. Since we used frozen maitakes, we had to let our mushrooms thaw for about 45 minutes before dicing them. Another mushroom that would make a great substitute for maitakes in this recipe is lion’s manes, although they’re different flavors.

Some people have reported gastric upset from eating American groundnuts. Thankfully, we’ve never had such an experience.

Our guess: if you cook American groundnuts really well, whatever compounds that might otherwise cause gastric distress are broken down and rendered inert. So, don’t skimp on the cook times with this recipe.

And if you’ve never eaten American groundnuts before, maybe just have a small bowl of chowder your first time. Don’t worry, it tastes just as good if not better the next day, and you’ll then have plenty of time to know whether you’re likely to suffer averse reactions.

6. Spruce milk/cream or not?

If you read above, you know that: a) I screwed up, and b) using spruce needles is optional when making this recipe. Recommendations: Let us repeat: this is intended to be a base recipe to build on. Once you know the flavor, you might decide to alter future iterations or experiment with additional ingredients: Worcestershire sauce, that homemade balsamic vinegar you made…? Go for it!

As for garnishes, we used: We hope you enjoy this American groundnut and maitake mushroom chowder recipe. If you come up with some good revisions and modifications that make it even better, please share your ideas and results in the comments!