How to find, ID, and eat Umbrella polypore (Polyporus umbellatus) – with recipe! 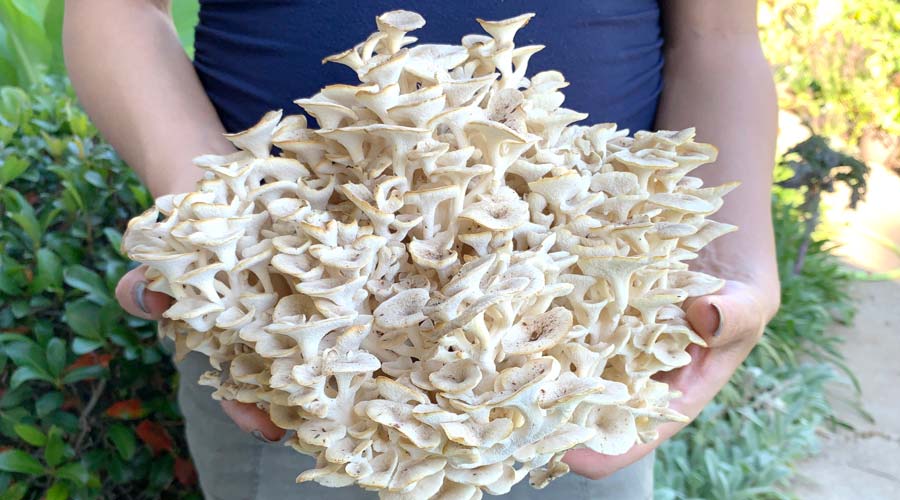 Tyrant Farms is reader-supported. When you buy through links on our site, we may earn an affiliate commission. Learn more
436 shares Umbrella polypore (Polyporus umbellatus) is a choice edible and medicinal mushroom that can be found throughout North America, Europe, and Asia. Similar to maitake mushrooms — but far more rare — you can often find them at the same spot at the same time year after year.

One of the wonderful things about foraging is you start to develop deep layers of knowledge about the places around you. You get to intimately know the flora and fauna in your area — including the ones that provide you with delicious foods year after year. Perhaps it’s an early spring morel mushroom spot, a late summer pawpaw patch, or a tree that produces chicken of the woods each July.

We have a similar relationship with Polyporus umbellatus, aka umbrella polypore and lumpy bracket mushrooms.

Late August – early September, we have a favorite foraging area we go to on a mountain trail that consistently produces a large, beautiful umbrella polypore. Since this time period coincides with The Tyrant’s birthday, we also refer to it as her “birthday mushroom.” In our experience — and the experience of other mushroom foragers we know — umbrella polypores are exceedingly rare, so it’s quite a treat to have a regular spot to find them each year. In fact, in all of years foraging and exploring, we’ve only ever found umbrella polypores in this single spot. Rare indeed!

The soon to be birthday girl (The Tyrant) holding her “birthday mushroom” (an umbrella polypore).

When do umbrella polypores grow?

In our spot, umbrella polypores grow in late summer (late August – early September). We’ve seen other reports of them being found in the spring, summer, and also early fall in various other regions around the US, so consider these a warm weather fungi to keep an eye out for, with seasonality varying by bioregion. Why hello there, gorgeous! Want to come over for dinner tonight? We were very happy to see this umbrella polypore at our annual harvesting spot.

The good news: once you’ve found an umbrella polypore spot, set a calendar reminder for the next year, because you’re very likely to find it again fruiting in the same spot around the same time. This is true as long as its host tree is still there or hasn’t completely rotted or been removed.

Where do umbrella polypores grow?

They are parasitic, emerging from the underground roots of living trees. They prefer hardwoods, especially beech and oak trees. (In our spot, they’re fruiting from beech tree roots.)

How do you ID umbrella polypore mushrooms?

Umbrella polypores have a very distinctive appearance. Once you’ve seen one, you won’t mistake it for anything else. Umbrella polypores might just be the most beautiful mushroom we find. They look like something you’d expect to see growing on a coral reef, not out of the ground.

As their scientific name (Polyporus umbellatus) implies, umbrella polypores are:

Here are the primary distinguishing features to help you identify umbrella polypores:

Umbrella polypores have a white spore print. You can take a spore print by facing the caps and stems pore-side down on a glass plate or black surface and waiting for enough spores to drop to distinguish their color (6-12 hours). A closer look at the basal stem on the underside of an umbrella polypore.

Umbrella polypores have a single, thick basal stem where it emerges from the ground/tree system, similar to a maitake mushroom.

The stem then branches out extensively into a gorgeous coral-like structure, terminating in hundreds of rounded caps. Here are some sections of the umbrella polypore mushroom torn off to show a better look at the internal stem and branching structure.

A closer look at the top side of umbrella polypore mushroom caps.

Each cap is round and looks like an umbrella turned inside out. White in color when very young, the cap surface on mature specimens are greyish in color with brown speckles. A closer look at the pores on the underside of umbrella polypore stems and caps. These pores emit millions (or perhaps billions) of spores, a small percentage of which will find the right spot in the forest on a host tree to begin growing.

Each cap on an umbrella polypore forms small (~1″) wide, thin, delicate circles, unlike maitake caps which tend to be fan-shaped and much thicker. The stems and underside of the umbrella polypore caps are white and covered with small pores.

Are there any umbrella polypore lookalikes?

The closest lookalike to an umbrella polypore is maitake mushrooms (Grifola frondosa), another favorite edible mushroom that we’ve also written about. Maitakes fruit much later in our area, from October – November. Two giant maitake mushrooms in the trunk of our car after another foraging excursion.

They also tend to be larger, denser, and heavier with thick elongated fan-shaped caps rather than round caps.

Black-staining polypore (Meripilus sumstinei) looks more similar to a maitake than an umbrella polypore. They are edible, but only good when young. They’re also extremely dense and fibrous when mature, making them difficult to cut with a knife.

Cauliflower mushrooms (Sparassis spp.) are parasitic to conifers (not hardwoods), often growing at a pine tree’s base or from their underground roots.

Cauliflower mushrooms also don’t form individual round caps, like umbrella polypores do. Cauliflowers have a similar structure to a rose flower, and are also a choice edible. At 1 lb 4 ounces, this is a relatively large umbrella polypore. By comparison, we’ve found maitake mushrooms that weigh well in excess of 10 pounds each.

Umbrella polypores taste savory and sweet when young. They have a much stronger umami and earthy flavor as they age.

Do umbrella polypores have medicinal properties?

Yes, like many mushrooms, umbrella polypores have medicinal benefits. As this 2015 research paper notes:

“Over the past few decades, researchers have found this taxon to contain many bioactive compounds shown to be responsible for antitumor, anticancer, antioxidant, free radical scavenging, immune system enhancement and antimicrobial activities. Due to its promising medicinal value, P. umbellatus is used as an ingredient in many medicinal products and food supplements.”

There seems to be much more research on umbrella polypores coming out of Asia than in the west since they’re more commonly known throughout Asia due to their traditional use in Chinese herbal medicine.

How do you use eat umbrella polypores?

It’s generally recommended that you cook pretty much any mushroom, especially ones you harvest in the wild. This not only kills any potential pathogens that may be on them, but it also breaks down the difficult to digest chitin in the cell walls, making their nutrition more bioavailable.

You can eat umbrella polypores the same as you would pretty much any mushroom. This can be as simple as chopping them, sweating them in a skillet, then adding a bit of butter and salt to sauté them until slightly crisped.

However, for some reason maitakes and umbrella polypores always put us in the mood for Asian-style soups, hence our umbrella polypore ramen noodle soup recipe below! This recipe can also be made using any other type of mushroom, from maitake to wood ear to oyster mushrooms. Yum! Umbrella polypore ramen noodle soup with fresh veggies. Asian soups are the perfect way to use this type of mushroom. We hope you have a chance to find and enjoy your own umbrella polypore mushrooms!