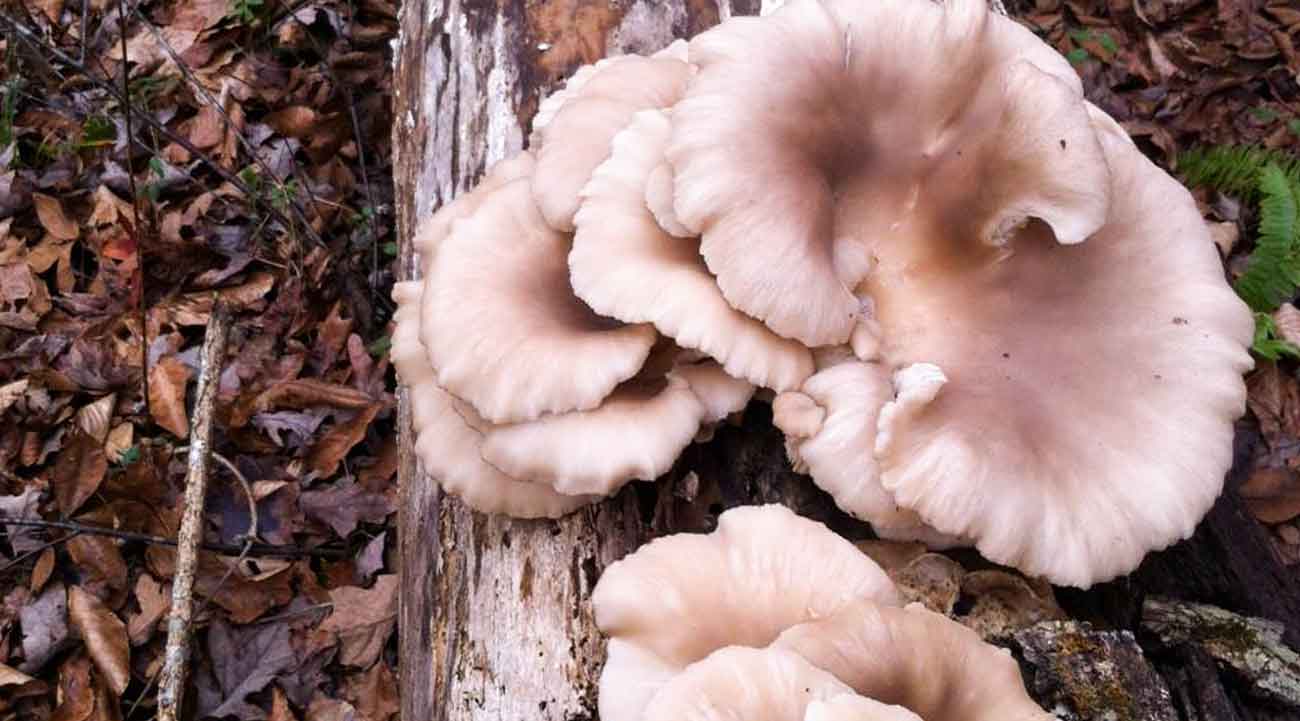 Tyrant Farms is reader-supported. When you buy through links on our site, we may earn an affiliate commission. Learn more
404 shares

One of the reasons we love immersing ourselves in natural history is that it helps make sense of the world we live in. Without a basic understanding of our “pale blue dot” and how it works, we’d be blind, deaf passengers born on a ship with no discernible sails or compass. How would we know where we came from, where we are, or be able to chart a course forward?
Historical (and pre-historical) knowledge provides context.

We were reminded of this axiom on a recent fungi foraging excursion. This time of year when the weather is cool and rain is frequent, certain species of seasonal gourmet mushrooms begin to fruit. One species of common winter fungi that we’re fond of is winter oyster mushrooms (Pleurotus ostreatus). 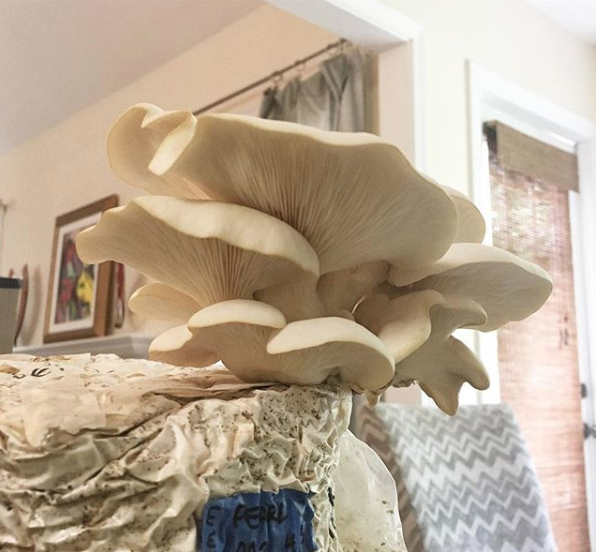 Oyster mushrooms grow abundantly in the wild on dead or dying trees, and can also be easily cultivated.

Oyster mushrooms have long been considered a delicacy in cultures around the world, and are now becoming so popular in the US that you can often even find them in mainstream grocery stores.

Oyster mushrooms are classified as “white rot fungi.” White rot fungi have the distinct honor of being the only microorganisms on earth that can break down lignin. Lignin, in case you didn’t know, is the polymer in plant cells that gives trees and other plants their tough, woody structure. Once the white rot fungi breaks down the tree’s lignin, it’s able to slurp up all the delicious cellulose the plant cells have to offer. 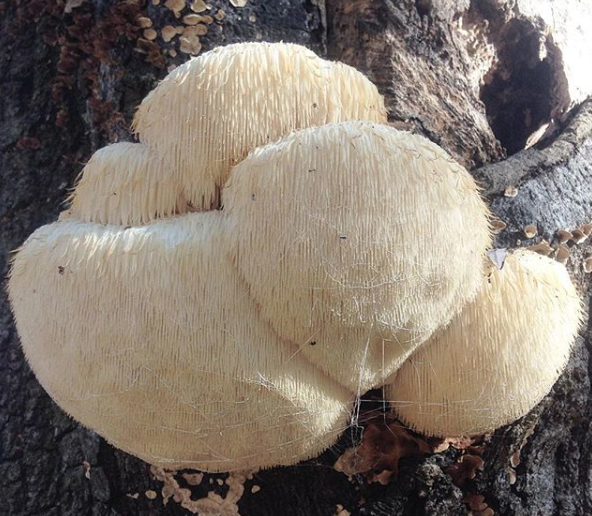 We were excited to find this giant Lion’s Mane mushroom (Hericium erinaceus) munching on a dying oak tree. This mushroom tastes like crab or lobster meat and has fascinating medicinal properties as well.

Without white rot fungi, dead fallen trees would just lie on the ground, largely undigested, eventually becoming dense deposits of soil carbon. Instead, fungi break them down and they seemingly disappear in months or years (depending on the size of the tree). The parts of the tree not eaten by white rot fungi are digested by other microorganisms whose excreta (that’s a fancy way of saying poop and pee) become fertilizer for other plants… and the cycle repeats. 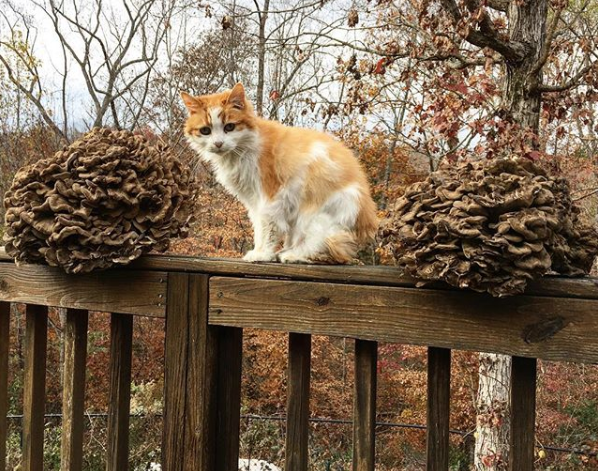 Another nice find, these two giant white rot fungi weighed about 25 pounds. These are maitakes (Grifola frondosa) some of the most prized edible and medicinal mushrooms in the world.

Which brings us to fossil fuels, that stuff we’ve been digging up (in various forms) and burning as our primary energy source since the Industrial Revolution. The reason they’re called “fossil fuels,” is that they’re quite literally fossils…

Next Stop In Your Time Machine: The Carboniferous Period

If you were to hop into your time machine and set your destination to 360 million years ago, you’d find a world covered by forests of huge trees. This is what we now call the Carboniferous Period.

An early depiction of what the world would have looked like in the Carboniferous Period (360 – 300 million years ago). Image credit: J. F. Horrabin (Illustrator) – Internet Archive identifier, Public Domain, Link

Hopefully, you packed a breathing device, otherwise you’d develop hyperoxia, given that the atmosphere at this time was 35% oxygen, rather than 21% as it is today. All that oxygen is wonderful if you’re a giant dragonfly the size of a seagull.

As you walked through the forest, the trees might look a bit odd to you. Unlike the thin-barked trees you’re used to back home in 2016 with a bark:wood ratio of 1:4, many of the trees are more bark than wood, with bark:wood ratios as high as 20:1. That’s a lot of lignin!

Underneath your feet, you might be surprised by the spongey feel of the soil, whose high carbon content made of largely undigested plant matter dwarfed anything you’d find today.

Coming out from behind a giant fern, you step on a fallen branch, making a loud snap sound. This alerts some giant predatory dragonflies to your presence, so you decide it’s time to check out and travel forward in time to 300 million years ago, aka the end of the Carboniferous period. 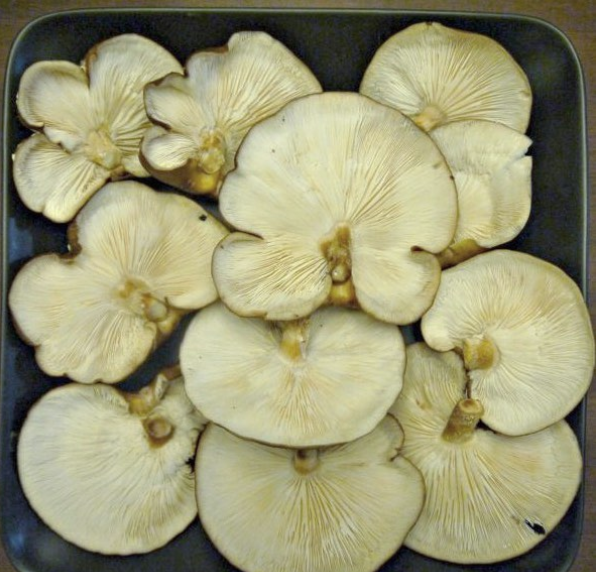 Shiitake mushrooms are another fantastic edible mushroom in the white rot group. Click here to read an amazing shiitake hack you can use to drastically increase your Vitamin D levels.

It was right around this point in time that the first species of white rot mushrooms somehow cracked the lignin code and began to digest dead or dying trees. Instead of forming vast underground deposits of carbon, those trees would now be broken down by mushrooms, much as they are today.

Very few fossil fuels were created after this point in geologic history, the end of the Carboniferous Period. Now, back to the future…

In 1870, John D Rockefeller started a company that would go on to become a gigantic global monopoly: Standard Oil. They might not have known exactly what that glorious black liquid was that was making them so rich at the time, but since you saw it all happen in your time machine, you know they were digging up liquified plants from the Carboniferous Period. A cartoon from the turn of the 19th century depicting public perception of Standard Oil at the time: a vicious global behemoth with tentacles wrapped around all the power structures of society. Public Domain, Link

Standard Oil would soon grow so big and so powerful that it brutalized smaller businesses and competitors, bought politicians, wreaked havoc on the environment, and controlled governments – both foreign and domestic. In today’s dollars, the company’s value was likely around $1 trillion. To put that in to perspective, that’s twice the market cap of America’s two largest companies today, Google and Apple, each of which is valued at about $500 billion.

Finally, in 1911 after years of egregious abuse and public outcry, the US government forced Standard Oil to be broken apart under the Sherman Antitrust Act; the aim: increase competition and decrease monopolistic abuses.

The result? Standard Oil became many “small” companies, two of which you still know today as ExxonMobil and Chevron.

What If White Rot Fungi Had Been Around Earlier?

What if you’d travelled back to 360 million years and white rot fungi had already adapted the ability to break apart lignin? No fossil fuels.

Now, imagine our world today without the advent of cheap, plentiful oil, natural gas, and coal. Deepwater Horizon explosion and oil spill, 2010, the largest accidental marine oil spill in the history of the petroleum industry. Regardless of how we feel about them, cheap and abundant fossil fuels are the foundation of every modern economy… for now. Image credit: Unknown – US Coast Guard – 100421-G-XXXXL- Deepwater Horizon fire (Direct link), Public Domain, Link

If necessity truly is the mother of invention, maybe John D Rockefeller would have formed Standard Solar; maybe Henry Ford would have been more like Elon Musk, rolling out the world’s first battery-powered automobile, the “Model Tesla” (abbreviated Model T) in 1908, while pioneering radical new solar and battery technologies to power our cars, homes, and cities. Maybe, instead of oil spills and pipeline protests, our news headlines would be full of people trying to figure out what to do about solar spills and wind pollution.

And maybe, just maybe, if we hop back into our time machine and set the destination forward to 2100, we’ll find a world vastly more advanced, with clean fuel technologies that will make our fossil fuels look like, well, dinosaurs. We sure hope so.

Until then, we hope you’ll never look at a mushroom the same way again!