Florida betony: how to ID, grow (in containers) & eat Tyrant Farms is reader-supported. When you buy through links on our site, we may earn an affiliate commission. Learn more
3 shares

Florida betony (Stachys floridana) is an attractive, low-growing plant in the mint family that produces delicious edible tubers. Arguably native to Florida, these plants are often considered an aggressive weed and should only be grown in containers if intentionally cultivated.

Let’s get this part out of the way right now before pearls get clutched and angry emails get sent… Is Florida betony an invasive plant?

According to the USDA’s National Resource Conservation Service, an invasive plant is defined as follows: “A plant that is both non-native and able to establish on many sites, grow quickly, and spread to the point of disrupting plant communities or ecosystems.”

Is Florida betony a native plant? Nearly all reliable sources say that the plant is native to Florida. However, University of Florida Extension says there is debate as to whether it was actually endemic prior to 1940.

So it’s unclear whether Florida betony checks the first qualifier on the list (native plant status) to be considered invasive.

As for its ability to take over landscapes and disrupt other plant communities under ideal growing conditions (such as in irrigated lawns and gardens), the answer is yes. Thus, everywhere Florida betony now grows — from Texas to Virginia and even in its supposed homeland of Florida — it is generally considered an aggressive weed. A map showing where Florida betony has been observed growing in the wild in the US. Image courtesy of Invasive Plant Atlas of the United States.

However, despite the general disdain that farmers, gardeners, and manicured lawn enthusiasts have for Florida betony, the only state that currently classifies it as an invasive plant is Georgia. 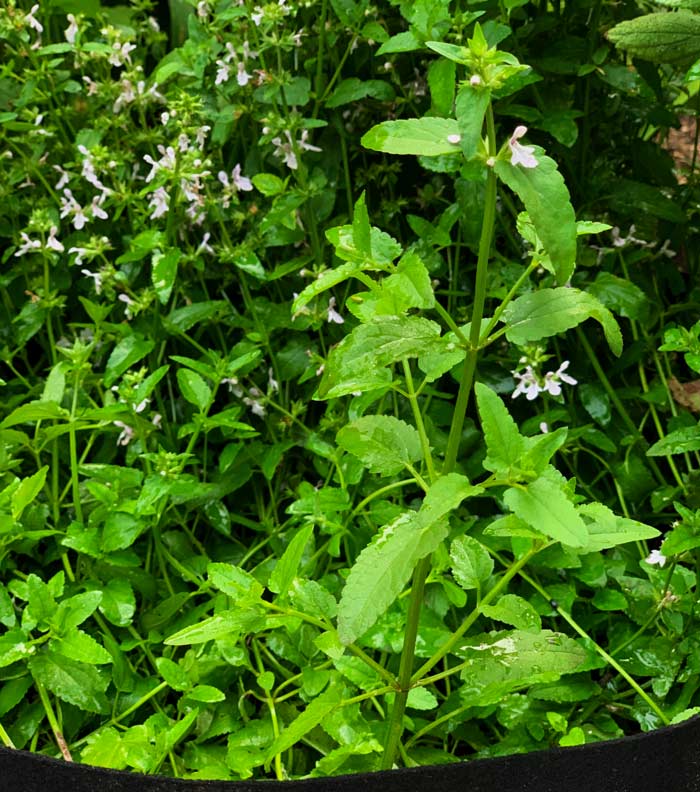 Florida betony flowering in May-June in a grow bag in our Zone 7b garden.

Other common names for Florida betony

Florida betony also goes by a few other common names: The tubers of Florida betony resemble a rattlesnake rattle.

Our introduction to Florida betony

We live in agricultural zone 7b on the outskirts of Greenville, SC (base of the Appalachian Mountains). My mom, who is an avid gardener, lives in zone 8a/9b in Mt. Pleasant, SC (5 minutes from the beach).

She’s long managed her neighborhood’s community gardens. Years back, she encountered a mint family plant taking over a section of the garden. She began pulling up the invading plant and noticed it had unique white underground tubers that looked like giant grubs.

Being an inquisitive science-oriented person, she wanted to know what the mystery plant was. In the process of discovering it was none other than Florida betony, she concurrently discovered that the tubers she was removing from the ground were in fact edible.

After tasting the tubers for herself, mom soon started serving Florida betony to family and friends. That’s because they’re one of the more delicious root crops/tubers you’ll ever eat — and they taste good raw right out of the ground, no prep required.

Florida betony tubers have the crisp juiciness of water chestnuts with a taste reminiscent of the sweetest mildest radish you’ve ever eaten (read: no heat).

Even if you don’t like radishes, you’ll probably like Florida betony. Do note that the tubers’ flavor and culinary appeal is somewhat seasonal, as we’ll detail below.

Growing our own Florida betony

On a visit to see mom shortly after her Florida betony discovery, she shared some tubers with us. We ate most of them and stuck a few into a grow bag back home in Greenville. (Although Florida betony grows abundantly throughout the coastal counties of South Carolina, we’ve never seen it growing in the wild where we live.)

Now, after a few years growing Florida betony, we have a pretty good sense of how it performs and grows, as well as how to harvest and eat it. Perhaps most importantly, we’ve managed to fully contain the plant to the grow bags in which it was originally planted rather than allowing it to escape into the wild. Now we’ll share what we’ve learned about Florida betony with you!

Florida betony is a mint family plant with a growth habit similar to many of its relatives. It spreads vigorously in open soil, forming dense, leafy upright patches about 18-24″ tall.

Although Florida betony grows best in full sun, it will tolerate part shade. It also tolerates a diversity of soil conditions from damp to dry, sandy to rich. The plant’s stems are square and slightly hairy. Leaves reach about 2″ long at maturity and are opposite, with 1 1/2″ long stems/petioles. They are slightly toothed on the margins and are either heart- or lance-shaped. From May-June in our zone 7b garden, Florida betony produces whorls of whitish pink trumpet-shaped flowers at the leaf axils. (In warmer climates, flowers develop much earlier.) The flowers desiccate and develop small black seeds.

In warmer climates (Zones 8+), Florida betony dies back to the ground in mid-summer and re-emerges as the weather cools in late summer through fall. Its most vigorous growth takes place during the cool months from fall through spring, absent a very hard winter freeze.

Here in Zone 7b, our Florida betony does NOT die down to the ground in summer. Instead, the only time the plant dies back is when temperatures dip below about 20° (-7°C). However, it tolerates light freezes without skipping a beat. Early February in Zone 7b – this Florida betony is temporarily frozen back by temperatures in the mid-teens.

Is it best to grow Florida betony from seed or tubers?

Knowing how to identify Florida betony in the wild (using the information above) can help you source your own plants for home cultivation. By far the easiest way to start your own Florida betony plants is by digging up wild or cultivated tubers (or buying them), then burying them on their sides about 2″ below the soil line in pots, grow bags, or other containers that will prevent them from running and escaping.

We have our Florida betony growing in large grow bags in our back yard where our ducks forage throughout the day. They don’t eat or bother the mature leaves spilling over the sides of the grow bags, but they very likely kill/trample any seedlings that happen to result from escaped seeds.

A large grow bag of Florida betony. Interesting note: a small tear occurred at the base of this grow bag, which was soon discovered by the betony growing within (see the leaves emerging from the hole?). This demonstrates how deeply the runners can go in pursuit of new terrain. Growing Florida betony in shallow, open-bottomed raised beds is unlikely to contain its spread.

If you don’t have poultry to help with potential seed escape, you could also remove any young seedlings you spot around your containers long before they have a chance to develop tubers. If they do successfully manage to develop tubers and runners outside of desired areas, control will require the complete removal of all underground tubers and runners, which isn’t easy. Be warned and plan accordingly!

Mature tubers on Florida betony are ideal for harvest from *spring through summer when they’re white in color and hard to the touch. By late summer/fall, many of the tubers will start to take on a tan color and be less crisp (read: not ideal for eating). A handful of Florida betony tubers harvested late in the season (August) in Zone 7b. Ideal tuber harvest window is late spring through early summer (on the early end of that spectrum in warmer zones, 8+). Younger bright white tubers have the best flavor and crispiness.

Personally, I find the flavor and texture of Florida betony tubers so enjoyable that I’ll just eat a handful of them raw while working out in the garden. That’s to say, they don’t tend to make it inside.

It’s also worth noting here that Florida betony is a close relative of crosnes (Stachys affinis), which produces a highly coveted gourmet tuber often featured on the menus of the world’s top restaurants. We have not tasted the tubers of both plants side-by-side to see how they compare, but let us know if you have!

While the tubers of Florida betony are the culinary gold, all parts of the plant are edible.

Florida betony leaves and stems taste almost exactly like the edible weed henbit (Lamium amplexicaule) which tastes almost exactly like common button mushrooms (Agaricus bisporus). If a = b and b = c, then a = c. That’s a mathematical way of saying that Florida betony leaves taste oddly fungal like button mushrooms, albeit with a different texture.

The flowers have a similar flavor to the leaves but with a slightly sweet addition, thanks to their nectaries. A lady beetle foraging for prey on a flowering Florida betony plant.

While other parts of the plant are edible, we prefer other edible leaves and flowers in our garden and stick to eating Florida betony’s tubers.

What else is Florida betony good for?

In addition to being an edible plant, Florida betony also appears to have some interesting medicinal properties. Research on the plant is presently sparse, but a few potential medicinal benefits have been noted in the literature, including:

Between its culinary and medicinal potential, it would appear that Florida betony is quite a useful weed!

We hope you’ve found this information about Florida betony useful. Again, if you do decide to cultivate this plant, please take all necessary precautions to prevent it from spreading beyond the containers you grow it in.

Dig into other articles about unusual edible roots and tubers: