9 amazing duck facts that will blow your human mind

Tyrant Farms is reader-supported. When you buy through links on our site, we may earn an affiliate commission. Learn more
424 shares

These duck facts will help you realize that ducks are smart, highly sociable creatures capable of mind-boggling feats of athleticism. They also produce tasty eggs coveted by gourmet chefs and poultry enthusiasts alike.

Years ago, when we decided to get egg-laying ducks, we had no idea how profoundly that decision would change our perception of animal intelligence and emotional capacity. After all, being told you have a “bird brain” isn’t intended to be a compliment!

Since then, our flock of Welsh Harlequin ducks has been an ongoing source of entertainment and education (and occasionally a source of extreme irritation when they break into one of our strawberry patches or garden green beds). 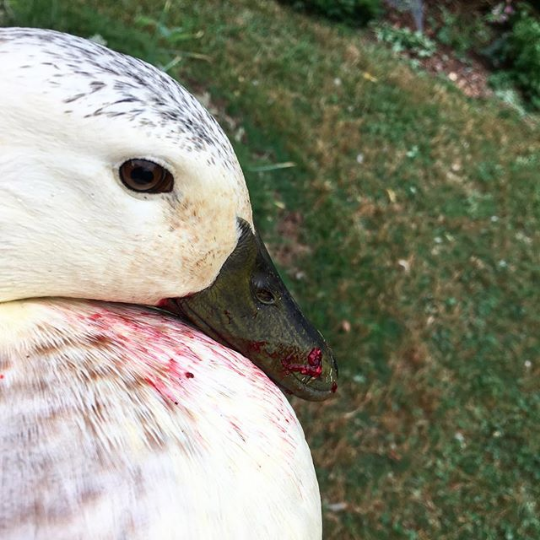 “You have no proof that I ate your strawberries.” Pippa the Welsh Harlequin duck looking a bit guilty (but not apologetic) after breaking into our strawberry patch.

Even if you don’t have ducks, we hope these nine duck facts will help you better appreciate these amazing creatures!

1. Ducks can close one eye and put half their brain to sleep.

Alligators, ospreys, bald eagles… there are a lot of critters out there that would like to make a meal of a duck.

One way ducks have adapted to get some good shut-eye while still keeping a look out for potential danger is to close one eye in order to put half their brain to sleep while keeping the other eye open and the other half of their brain awake and alert. 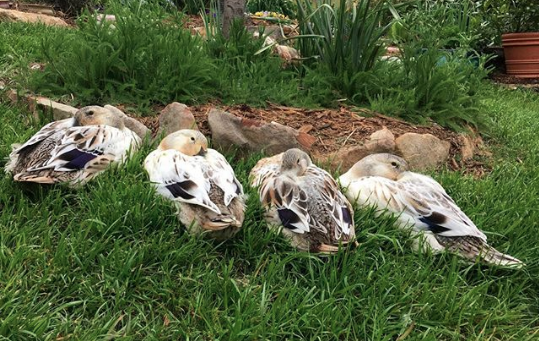 Hmm, which side of my brain needs a nap?

When a flock of ducks are together, that means every duck can take half-brain naps and keep one eye open looking for trouble. Interestingly, the researchers from Indiana State University who initially discovered this phenomenon, noted that half-napping ducks positioned on the outside of a group would keep their outside eye open and the eye facing towards the group of ducks closed. Meanwhile, ducks in the center of the flock would go fully to sleep, closing both eyes. Synchronized sleeping!

Yes, our ducks do the one-eye nap trick too, even though their greatest threat is whether we’re going to bring them tomatoes or lettuce for a treat.

2. Ducks can produce more eggs than chickens (and their eggs taste better and are more nutritious).

If you know a really good chef or baker, ask them whether they prefer duck or chicken eggs. We’ll bet you they’ll say “duck eggs” 9 out of 10 times.

Why? Ducks eggs aren’t just larger than chicken eggs, they also taste better and creamier, primarily due to their larger yolk-to-white ratio. Chicken eggs also tend to have a more sulfury flavor than duck eggs. 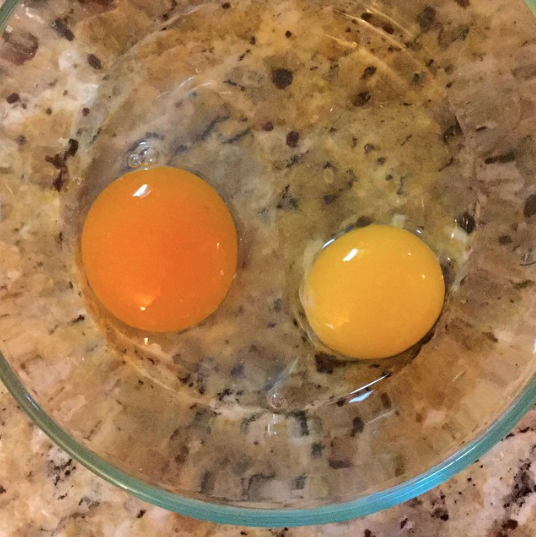 One of our duck eggs (left) versus an organic free-range chicken egg (right). The average duck egg weighs at least 2.5 ounces, the equivalent of a jumbo chicken egg.

As we’ve written about extensively here, some duck breeds can lay more eggs per year than the highest performing chicken breed (52 lbs of eggs versus 34 lbs) and also have much more nutritious eggs. Of course, we advise all poultry caretakers to balance their animals’ wellbeing against the needs for egg production.

It takes a lot of energy to produce an egg – if you push your girls too hard, you’ll end up with a greater frequency of sick and unhealthy ducks. Animal health and happiness first, egg production second is the best philosophy for the poultry enthusiast!

Conventional scientific wisdom has held that abstract thinking was only possible in a handful of super-intelligent animals such as apes, crows, and dolphins. It was also thought that abstract intelligence required experiential learning and possibly teaching/instructing from an adult in combination with punishments/rewards.

Researchers found that as soon as ducklings hatch, they have a remarkable degree of abstract intelligence. The study’s co-author, Alex Kacelnik, of Oxford University’s zoology department, said: “To our knowledge, this is the first demonstration of a non-human organism learning to discriminate between abstract relational concepts without any reinforcement training.” 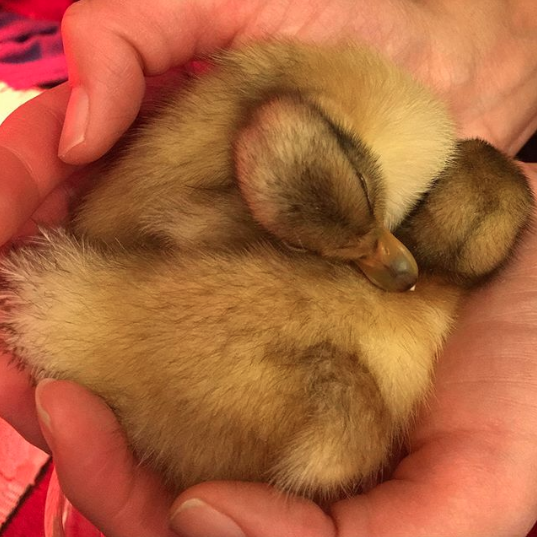 In addition to possessing surprisingly high levels of abstract intelligence, ducklings might be the cutest creatures on the planet.

Next time somebody calls you a “bird brain,” just respond with a thank you quack.

4. Ducks have one of the longest penises in the animal kingdom.

In most bird species, males don’t have penises. That’s not the case with ducks, however. In fact, drakes (male ducks) have extraordinarily long corkscrew-shaped penises.

Although the average length of a duck penis is about 8″, one species of ducks, the Argentine Lack Duck (Oxyura vittata), has a 17″ long penis, one of the longest in the animal kingdom. 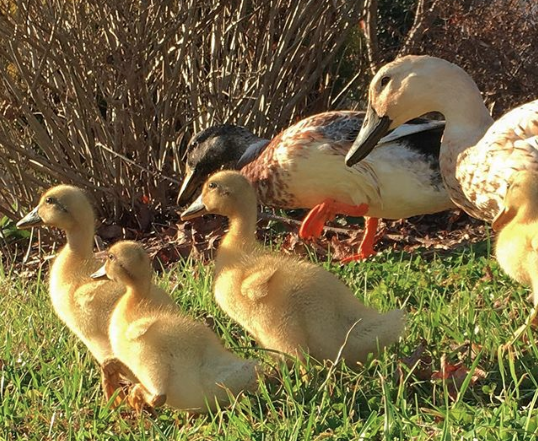 Sir Winston Duckbill (in the back with orange legs), is our only drake. He’s a lucky man.

If you want to learn more about duck reproductive organs and their odd mating behaviors, read Understanding duck mating and courtship.

Like a duck out of water? Sure, ducks might not be great at walking on land, but they’re remarkably good flyers, especially when migrating.

Their average flight speed is 50 mph (for reference, Usain Bolt can barely top 23 mph), and some ducks can achieve much greater speeds. A red-breasted merganser was recorded flying at 100 mph, which is about 40 mph faster than a cheetah, the world’s fastest land animal. 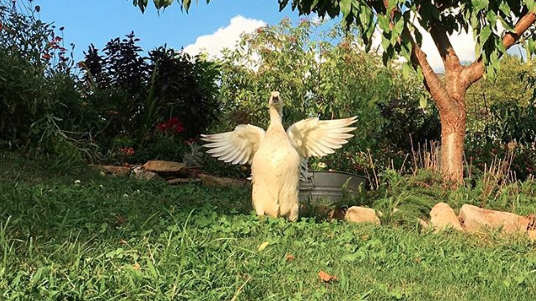 Our Welsh Harlequin ducks are flightless, but sometimes they seem to forget that.

Ducks are also capable of traveling enormous, non-stop distances at crazy altitudes. With a good tailwind, mallards can travel a distance of 800 miles in an 8 hour flight (that’s a distance longer than the entire state of California). Yes, that sort of travel consumes quite a bit of energy, which is why they’ll rest and feed for up to a week between flights.

How high can a duck fly? Usually, they stay in an altitude range between 200-4,000 feet, but the record is 21,000 feet. Unfortunately, the current record holder was struck by a jet plane!

6. Ducks can live longer than dogs.

Desi the Duck, a female mallard duck who lived in the United Kingdom, was 20 years old when she died, making her the world’s oldest duck ever. 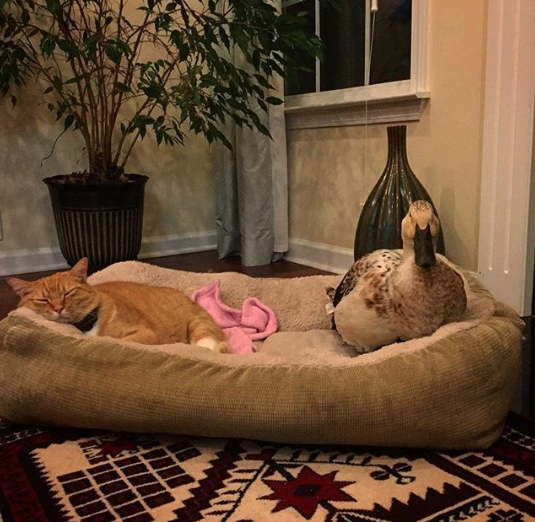 Outliving a cat might be a bigger challenge… Jackson the duck (right) is determined to outlive our cat (left). Both are about a decade old in this picture.

A duck’s average lifespan in the wild is between 5-10 years, but a domesticated house or backyard duck who is well taken care of can easily live into their teens. Duck hens can continue to produce eggs for up to 10 years as well, although their egg production will significantly taper off by that age.

(Take a deeper dive into ducks’ lifespan and how to have the longest-lived domesticated ducks possible.)

Ducks’ eyes are nothing short of amazing…

Their visual field is 2x larger than humans and they can see distant objects 2.5-3x more clearly than us. Oh, they also have three eyelids and 4-dimensional color vision.

Curious to learn more about how ducks see the world? Make sure to read 9 amazing duck eyesight facts once you’re done with this article!

Have you ever wondered why ducks (or other waterfowl) sometimes stand on one foot? It’s the same answer to the question: “How do ducks keep their feet from freezing or making the rest of their bodies too cold?”

After all, you (human) couldn’t stand outside barefoot on a freezing day, even if you had on a heavy jacket.

Answer: “rete mirabile” a biology term that means “wonderful net” in Latin. Ducks have a specialized arterial network in their legs that:

By standing on one leg while they rest, ducks cut heat loss through their legs by ~50%, which means less energy expenditure. Every calorie an animal expends is a calorie it has to consume, so these adaptations and behaviors are seriously advantageous in the wild.

9. Ducks in flight are like a flying feathered bagpipe because of their amazing respiratory system.

Ever wonder how a duck can go from sea level to the altitude of Mount Kilimanjaro in a short period of time without a problem (this would cause hypoxia in humans)? Or quack in mid-flight? Or fly 800 miles in a day? Or fly at all?

The key ingredient that makes this magic possible is their extraordinarily complex respiratory system, which works completely differently than mammal or insect respiration. Check out this brilliant visualization from TableTopWhale to see it in action:

A bird’s lungs are only about half the size of a mammal’s lungs, proportionally. They also don’t change in size, or inflate and deflate, like our lungs do while breathing. Air is drawn through their lungs uni-directionally via a series of air sacs, some of which extend into their bones.

Human lungs are inflated and deflated by our diaphragm. However, birds don’t have diaphragms. Instead, their air sacs are ultimately controlled by their muscles – that means the more they move, the more air comes into their air sacs. When they are taking off for flight or flying, they’re essentially filling themselves up like a balloon. This allows for greater oxygen-carbon dioxide exchange, but it also makes them much lighter relative to their body size than they are when they’re not flying. Pretty cool! 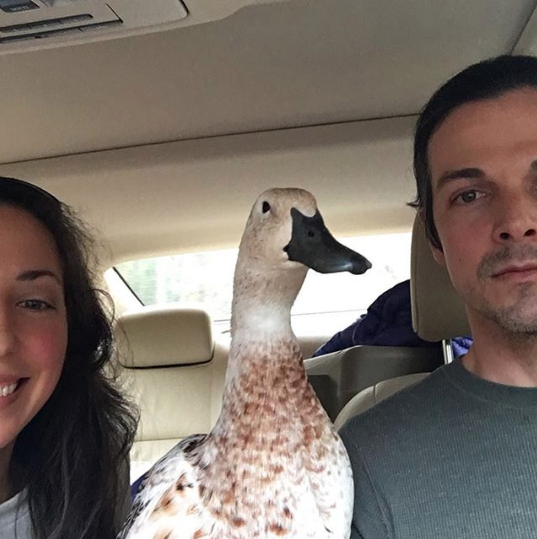 A recent road trip with Svetlana the Duck (she prefers to travel in triangle formation).

Ducks in flight are like feathered bagpipes – their specialized air sacs and vocal organs allow them to quack whether they’re inhaling or exhaling. (Try inhaling and singing at the same time to see how amazing this is.)

If you want to geek out on duck/bird respiration, here’s an interesting article from University of Illinois.

We hope these amazing duck facts will help you better appreciate ducks and other wildlife around you! It’s an amazing world out there.

Fly on over to these other duck articles: